Mia holds her perfect trim before she returns to her data collection and contemplating the possibilities for the devastation at Western Sambo Reef.

Today Scubanauts dove in Western Sambo Ecological Reserve, a series of reefs near Key West. Like the Looe Key Reef that we have been diving for most of the week, Western Sambo Reef is a protected area in the Florida Keys National Marine Sanctuary. However, we were surprised at what we saw there.

The Sambo reefs not only lacked the biodiversity and abundance of the Looe Key reefs but the fish that were present on the Sambo reefs were smaller than the fish found on Looe Key. Fish population wasn’t the only difference. Our coral team noticed the same issues were occurring: smaller corals, less coral, and less biodiversity. Additionally, we noticed the lack of sharks. Sharks are an indicator species, meaning a species that indicates if a reef is healthy or not. No sharks were seen on our dives today, and that may be due to the fact that there is not enough food on the reef for a shark to survive.

Part of our science for the day included a group discussion regarding factors that may have effected the reefs. Looe Key Reefs is a  Special Proctected Areas (or SPA) which prohibit people from taking and touching, which includes anchoring and fishing. The same is true for an area designated an Ecological Reserve (ER), like Western Sambo. So we ruled out the level of protection as an influencing element in this particular case. We also hypothesized Hurricane Irma could have hit Sambo Reef harder than it would have hit Looe Key Reef which could have set the reefs back health-wise as well. However, data from NOAA does not support that. So we landed on another possibility: Another factor that may have a negative impact on the Sambo Reef is its proximity to Key West.  With its larger human population than the keys near Looe Key, there is more possibility for runoff and waste to enter the ocean. This could be the culprit behind the data we collected on these reefs. One other hopeful consideration is that Sambo Reef encompasses a large area, and perhaps sites we didn’t dive continue to have greater biodiversity than what we saw today. Only more data collection will tell.

So we will continue to collect our data and have some enjoyable dives, but to see that level of devastation further reinforces our motivation behind what we are here to do: help the oceans. 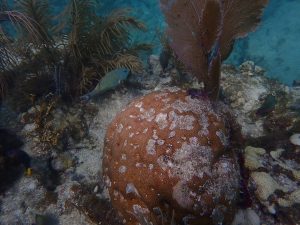 While this coral at Looe Key is not in the best health, it is surrounded by other life that extends in both directions. 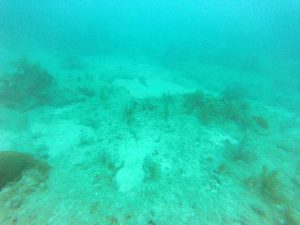 The Nauts agreed. The images from Western Sambo (above) look sadly like many of the dive locations they frequent in Central Florida in the Gulf of Mexico.