Up Close and Personal with Prehistoric Creatures 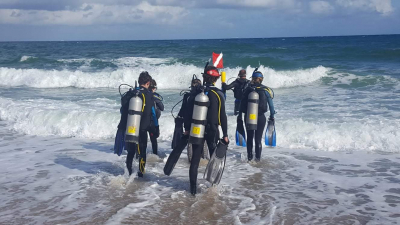 Our training prepares us for strenuous diving.

This weekend I had the pleasure along with 14 other SCUBAnauts to go shark tagging. We drove down to Fort Lauderdale where we were hoping to dive on the Copenhagen wreck. This was a beach dive right off of a restaurant. While the first group was diving, my group had lunch at a lovely restaurant. While the first group had to battle waves and strong currents, we enjoyed the view of the water. It took the first group 45 minutes to get from the shore to the dive buoy, and they seemed to be having a hard time getting to it. After lunch, group two suited up and started walking to the beach only to find out that the conditions were too rough for a second dive.

The next day we woke and drove to Key Biscayne and boated the Divers Paradise. After going through the safety briefing we were underway. We met the crew of 8 which consisted of mostly women and learned how to throw out the hook and buoy. Each hook has a 45 lb weight attached to it along with a line up to the surface with a buoy attached to it. After we had the chance to deploy 10 of these we would go back to check and see if anything had been hooked.

A surprise to all of us was how “hands-on” we were allowed to be. We were in three groups and each person had a specific role which he or she was responsible for. Two people would measure, one would attach a tag, one would hose the shark off to keep it cooled down, and the other person would take a fin clipping. The first buoy we pulled up had a nurse shark hooked. After getting it onto the floating platform everyone got to work. It was definitely organized chaos. People were yelling out measurements, asking for tools, collecting data, and taking pictures. After releasing the nurse shark we moved to the second and third buoy without any success until the fourth buoy where there was another nurse shark.

After tagging and releasing that one, it was my group’s turn. After two empty hooks, we found one with a black tip shark. My role was to take a fin clipping, and I have to say that it was by far the most incredible experience of my life. Being able to be so close to such an incredible and misunderstood creature is unlike anything else. After releasing him, Chelsea who was one of the scientists, handed me the hook that was used to catch the shark and told me I could keep it. Once we released a shark, we reset the hook and threw it back out. After that, the first group caught a 6.5-foot tiger shark. I was speechless to see such a powerful animal so close. The second group then caught the second black tip of the day. My group then caught a small Atlantic sharp nose shark. We switched jobs for this one and I was responsible for putting in a spaghetti tag. These tags provide the scientists with vital information to help protect and save these incredible creatures. After this, we packed up our stuff and headed back to the dock. We helped unload all of the equipment and then headed back to the west coast of Florida.

Overall this was an eye-opening experience that has made me really inspired to help save sharks. This is something I would definitely love to do again, and I’m so thankful for the opportunity that I was given.