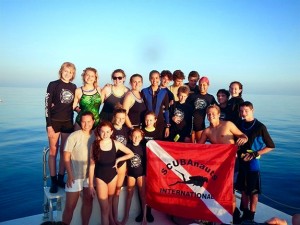 Prior to the Summer Expedition, youth members divided into research teams and selected research topics to study during their dives on Looe Key SPA. Project topics included Palythoa coverage related to depth, prevalence of coral bleaching and disease, comparing behavioral differences of day & night fish and invertebrates, and Pomacentridae (Damselfish) behavior on reefs. The research groups presented their results to SNI and Mote researchers at the end of the trip. 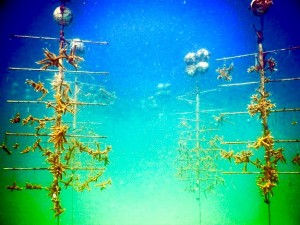 In addition to the Acropora nursery and outplanting efforts, SNI youth, or ‘nauts, collaborated with Dr. David Vaughan on a new project of Orbicella outplanting on patch reefs. This was the first time any group outside of Mote assisted Dr. Vaughan’s project; spanning a five decade age range between oldest and youngest divers.

The Combat Wounded Veterans Challenge (CWVC) supports veterans and families who have suffered trauma in combat. In an effort for wounded veterans to regain their interest in diving they collaborated with SNI in assisting Mote with Acropora outplanting. Later in the week, select ‘Nauts traveled to Key West to take part in U.S. Army navigation training. To test what they learned in the classroom, nauts and veterans buddied up on the underwater navigation course, a 500-m underwater swim using only a compass. Several buddy teams ranked above 90% when evaluated on speed and accuracy.