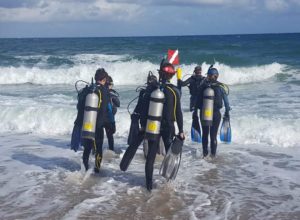 The Nauts enter the daunting ocean. This day, the ocean seems to win, but surmounting many challenges, the Nauts are the true victors.

On the recent Shark tagging trip to Miami, SCUBAnauts Diana, Sam, Trent, Trevor and I along with dive master Sam Phillips were the first to attempt a shore dive to a wreck. A second group of nauts was eating lunch at a nearby restaurant and were to do the same dive after the first group returned.  This was the first shore dive for some of the nauts, but everyone was able to get through the worst of the waves. The wreck was supposed to be a 20-minute swim from the beach, but it took the first group closer to an hour. During the swim through 1-2-foot waves most nauts became seasick and exhausted in the water, one naut had an especially rough time as he began throwing up and had to be towed for a short distance. Once the group reached the dive site, we began to descend but few could easily get down even after rearranging weights. At this point Mr. Phillips called the dive and the group began the swim back. Swimming with the movement of the waves made the swim back much easier however Diana and I managed to get stung by jellyfish. 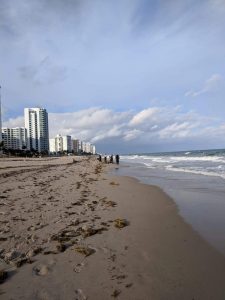 When we reached the shore, we were several hundred yards away from our drop point and we had to walk back with gear in tow. The parents and the nauts in the second group had seen our struggle and came out to help by bringing water and helping to haul tanks.  Once we reached the drop point Diana and I were able to have our stings taken care of and the group was able to rest at a local sandwich shop.

While this event was unfortunate, it reminds us why we go through our yearly training cycles. These types of situations have the potential to become very dangerous if the divers do not have the proper training. I know that Mr. Philips would have preferred to have taken us on a wonderful dive, but the adversity in this dive was much more valuable to me. The best of dives plans rarely go as planned, and it is our responsibility as divers to be able to handle less than ideal circumstances. Every person in the dive group was able to recover and enjoy the following day of shark tagging and science.