Our first day in Jupiter, Florida began with a shore dive at the world 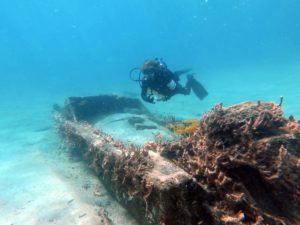 renown dive site “Blue Heron Bridge.” First, we performed a few navigation exercises for the NAUI Master Diver course the majority of Nauts are taking. These exercises focused on compass navigation. After we finished navigation, Nauts practiced using a lift bag to raise a bag dive weights from the seabed. I found this very interesting as it will be used in a professional dive environment in possible careers later in our lives.

Once we all thoroughly practiced our skills and felt proficient, we had spare time in our dive so we toured the rest of the site. There was an abundance of small organisms such as damselfish and arrow crabs. Sadly, we eventually had to surface and swim back to shore. After re-bundling our gear and piling back in our cars, we started on our way to Jupiter Dive Center for more dives.

Jupiter Dive Center has a very nice boat to say the least, and the crew was always friendly and offering a helping hand. Shortly after arriving, all Nauts entered the dive shop to analyze our Nitrox tanks. Next, we loaded the boat, and after a short briefing we were on our way to “Area 51”. All of today’s boat dives were drift dives, so as soon as we splashed off of the boat, we were being swept by the current down one of the nicest reefs I’ve ever seen.

Area 51 was a long reef with an abundance of fish and macro organisms such as sea turtles and a wide variety of sharks. Almost immediately after reaching the bottom, we saw a large stingray quietly sitting on the sea floor. After a few minutes of being swept with the current, a few other Nauts and I spotted a moray eel peaking out of a crevice in the reef. Since it was a drift dive, we only saw him for a few seconds, but right afterward the group spotted a few seas turtles, including a juvenile hawksbill. Once we reached our dive time limit, we headed up to a safety stop where Sophia deployed an SMB (Surface Marker Buoy) so that the captain could pick us up as soon as we surfaced. 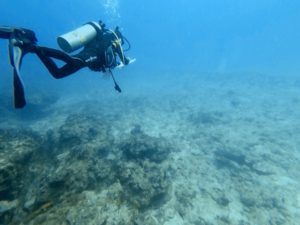 Following a short surface interval, we made giant-stride entries into “Spadefish Point.” While diving on Spadefish point, we saw around 5 different sharks! This dive site proved to be just as impressive as the last and we were all reluctant to surface after our forty minutes under the waves had passed. Our final dive for the day was on “Loggerhead” reef. Loggerhead got its name from its high population of Sea turtles. However, my dive buddies and I were fascinated by a 6-foot lemon shark that seemed to follow us all the way through out our dive. The shark even came as close as a foot from our faces. In the end, we had to surface like always and head back inland. On our way in, we organized our data from our fish counts and headed back to our home for the week.