SCUBAnauts “Dive In” Behind the Scenes at The Smithsonian

In our recent trip to Washington, DC for Capital Hill Ocean Week (CHOW) , SCUBAnauts had a chance to go behind the scenes at the Smithsonian National Museum of Natural History and meet first hand some of the curators and scientists who work there. 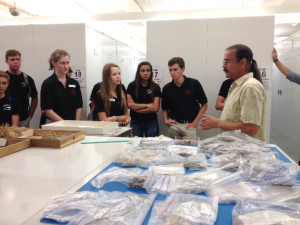 Tim Coffer, the Museum Specialist for Invertebrate Zoology, showed us the invertebrate collection, where they keep a specimen of nearly every species of invertebrate known today. Similar to shelves at a library, Mr. Coffer showed us rows and rows of sliding cabinets that contain specimens he has meticulously cataloged alphabetically by scientific name. Some specimens are from more than 200 years ago!  He said the constant discovery of new species and changes in taxonomic classification keeps him busy, but genetic techniques have made identifying and cataloging a specimen easier. One of the most interesting specimens he showed us was a fragment of Acropora cervicornis (staghorn coral) which was almost two inches in diameter. It was collected from Carysfort Reef from the Florida Keys in the late 1800’s. My favorite specimen he showed us was a punch bowl made from the shell of a giant clam! It was commissioned by former US President William Howard Taft while he was governor of the Philippines in 1902.

After our meeting with Mr. Coffer, we met with Dr. Courtney Cox, a scientist with the Smithsonian Marine Conservation Program, who showed us the laboratory and the science behind her work on parrotfish genetics. Through genetic barcoding techniques, Dr. Cox can track a fish from the ocean to the market and eventually to someone’s table. Her work is being used to test compliance with fishing bans and find rates of mislabeling of fish in markets around the Caribbean. This will help to conserve parrotfish populations which will in turn help improve overall reef health. 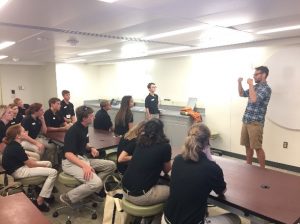 Ross Whippo of The Smithsonian Institute’s MarineGEO program talks with nauts about the SquidPop project to measure predator biodiversity.

We also met with Ross Whippo who works with Smithsonian Institute’s MarineGEO program. A skilled diver, Mr. Whippo has conducted underwater research all around North America and beyond and just recently returned from a biodiversity study in Hawaii. Some of his interesting work includes deep sea urchin populations and their relationship with kelp in Puget Sound, and more recently, the SquidPop. The SquidPop is like a lollipop for fish that is used to attract fish and measure predator biodiversity. Ross suggested the possibility of SCUBAnauts doing our own SquidPop tests! Data from tests all around the world are being compiled in an online database called Ocean Bitemap. 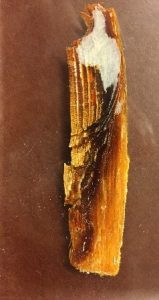 Whale ear wax can be used to learn about the life history of the specimen it was collected from.

Jennifer Collins and Megan Chen, two educators and exhibitors at the Smithsonian NMNH discussed the process behind what it takes to create an exhibit at the Smithsonian. Ms. Collins told us that one of the most important parts of an exhibit is the title. Without a strong title, no one will be interested in visiting the exhibit. She used the example of another exhibit they are working on about prehistoric ocean dwellers. Titles like; “500 Million Year Old Sea Creatures in Angola” or “Post-Cambrian Explosion Underwater Species” were too boring or scientific for the general public. The exhibit design group finally decided on “Sea Monsters on Earth,” a title which would pique the curiosity of everyone. They also do crowd surveys to find out what exhibits people find interesting. More pictures, less words, and touchable objects are some of the things they found that people enjoy the most.

Ms. Chen also talked about her curious work with whale earwax. Whale earwax can be used to determine the age of the whale, and, through chemical analyses, scientists can find out where the whale has been based on chemical traces in the water that are also found in the earwax. Ms. Chen studied the whale earwax collection to find relationships between human impacts in the past and current human stressors. We wrapped up our visit by exploring the new Q?rius lab where youths can meet the scientists and explore specimens and activities up close (https://qrius.si.edu/.)

Having the chance to go behind the scenes and talk to the incredible people at the Smithsonian is something not many people have the chance to do. I am very grateful to have been part of this amazing experience. Next time you are in DC, check out Smithsonian National Museum of Natural History (https://naturalhistory.si.edu/.)