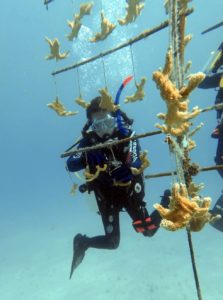 On her first five ocean dives, Naut-in-Training Maddie got straight to work in multiple coral nurseries, helping restore our reefs.

The Savannah, GA Chapter of SCUBAnauts International launched in January with an open house event, and by April, new students were in the Keys participating in coral restoration as AAUS Scientific Divers-in-Training. The weather was a bit of a challenge, but these nauts rose to the occasion and completed five dives over two days. See what Maddie has to say about her first ocean dives!

My trip to the Keys was amazing! Probably one of the best trips I have ever done. Being there with friends, and meeting new people made it so much more fun as well! When we got there, we unpacked our stuff and I met everyone that I was going to dive with. Everyone was super nice and welcoming, and I knew this was going to be a fun weekend.

The first night, we all met in a classroom and discussed what we were going to be doing underwater tomorrow. The next day we packed all of our stuff and took off into the ocean on our boat. We had already set up our gear the night before, so all we had to do when we woke up was get dressed and eat breakfast. Along with that we had a quick brief about what we were working on that day with the corals. It was about a 30-45 min ride out to the Mote Marine Lab nursery, but it was so fun crashing into the waves and getting soaking wet. 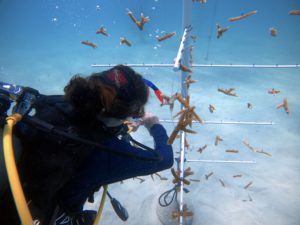 Maddie hangs newly cut coral fragments onto a coral “tree,” where it will grow until it is large enough to be replanted on a reef.

When we arrived at the site, each one of us one by one got on our gear and jumped into the water. Underwater, it was about 79F the entire weekend. That was a little cold for me, but I got over it after swimming around for a while. We would travel to the coral trees as a group, and we would work on different trees in two separate groups, so that we could hang more coral fragments. We would cut the coral, tie a very tight knot around it, and then hang it on a new tree, which, in time, would branch out and then be cut again. I did all three dives that day.

On the second day, I only did two because I had a headache. One of my dive buddies stayed with me on the boat so if I felt like I could go back down, he would come with me. The second day we went down to a different nursery, managed by Reef Renewal USA, and we cleaned the coral trees which were about 20 ft. tall. We had to scrub all of the moss and algae off of the rope so it didn’t keep spreading. I didn’t do that dive after that because of my headache, but the third dive was probably my favorite out of all of the dives I had done that weekend.

This dive was a fun dive on Looe Key where we would go and explore and sight see underwater in a coral reef. We were only under for about 30 min, but we saw so many cool creatures like pufferfish, nurse sharks, scorpionfish, and more. We even saw a humongous fish swimming around with a half eaten eel sticking out of its mouth! This was a dive I will never forget.

Overall I think this trip was a success, and we got a huge amount of work done that the MOTE scientists would have had to do and gained experience in scientific diving. I hope we can return and help them again soon!