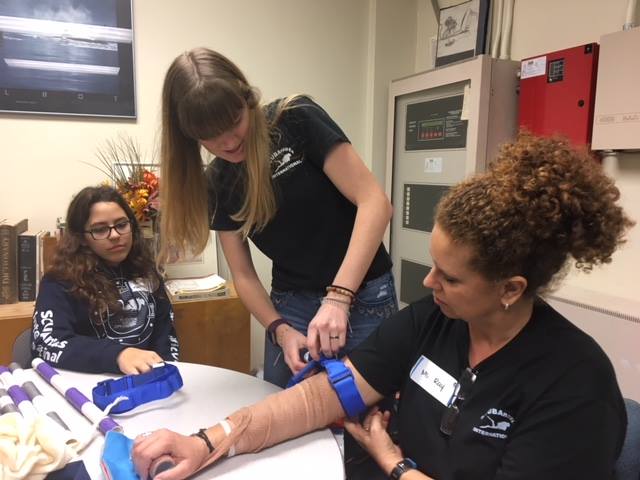 On January 27th and 28th, SCUBAnauts International members participated in either the DAN training course or the challenge at the USF St. Pete campus. The DAN training course is a class that covers many topics, including CPR, oxygen training, AED training, hazardous marine life, and dive-related first aid. Professional divers and diving instructors are required to take this course. Before the weekend, we were required to complete an online section of the course. By completing online work, we, as a group, were able to move faster through the materials since we already studied the basics.

I am a new SCUBAnauts International diver, so on Saturday morning I also needed to take the Scientific Diver course before beginning our DAN training. It was a fairly straightforward classroom course. We had to take a few tests on different topics such as formulating dive plans and basic marine science facts. None of the tests were particularly hard, and I am now closer to becoming an American Academy of Underwater Sciences scientific diver!

Then Saturday afternoon we went over an introduction to the DAN training course and completed scenarios in small groups. We worked on skills, like how to perform a neurological exam and how to approach a possible injured person. We worked with a partner of our choice to do this. It was sometimes funny to act out the situations.

Then, on Sunday morning, we broke into even smaller groups and starting working on learning and mastering certain skills that were required to pass the course. There were three stations – oxygen, CPR and AED training, and then a written

exam. For example, in the CPR and AED group, we learned how to perform CPR and use an AED on dummies. Everything was explained super well, and the volunteer instructors could not have done a better job. They split us up so that kids were not with their parents – we could meet new people and not have to work with our parents the whole time. Everyone in my group was nice and easy to get along with – it was a lot of fun.

Finally, on Sunday afternoon, it was time for us to take the final exam. We were split into two groups. One group took the written test, while the other did group scenarios. The scenarios used all of the skills you learned from the past two days. I was in a group of five people, and we all worked together to help the patient. The test was not too difficult, as long as you were paying attention to the online class and during the skill building exercises. It was multiple choice and covered information that we had reviewed many times.

Overall, the weekend was a really great experience. I met some other really nice nauts from other chapters and learned a lot about first aid. The professional class may seem difficult at first, but with the help of the volunteers and your fellow nauts, it is totally manageable.