Over Presidents’ Day Weekend, six Nauts traveled to the Keys to participate in coral restoration and new imaging methodologies. Here’s what Gabe had to say about the trip! 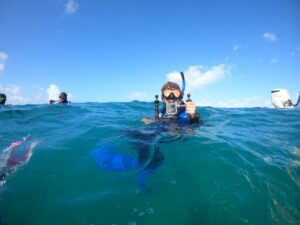 Gabe gets ready for a dive collecting hundreds of overlapping images that will be used to create a detailed photo mosaic of the reef where restored corals have been replanted.

Off we drove to the Keys, buzzing with the excitement and anticipation for the dives to come, leaving the stress of school and life behind as we set forth on our voyage. As we arrived, we felt  the tranquil familiarity of the Mote research lab that many of us have been able to visit several times this year. This being my third trip to Summerland Key, I have begun to associate the Keys as a place of rejuvenation where I can focus on the most important things to me. This is the place where I feel like I can have a direct positive impact on the world through diving in the ocean and conducting our scientific missions.

Bright and early, 6:30 am we had a quick start to our morning as Mr. Brooks alerted us of the breakfast that needed to be eaten and the lunches that needed to be made before we could set forth to the dive shop.

Splash! The water was slightly colder than most of us expected, but all the more refreshing. I was well awake by this point and Jaxon and I dove down to set up the photogrammetry.

After setting up the tape measures and the markers and turning the camera on, I began to swim back and forth, making sure to stay in a straight line to get every piece of the reef in frame. The coolest part was that the area we were mapping is a staghorn coral out planting site for MOTE, and it has integrated back into the reef seamlessly. Hopefully we can do it again in a couple years and see improvement on the reef.

Back to the Nursery

Nauts work to create new coral fragments in Mote’ nursery. They will grow to size here then be planted on the reef.

For our third dive of the day, we motored over to my favorite diving spot- MOTE’s coral nursery where we frag and hang corals. I thought back to all the dives I have spent meticulously stringing each coral up perfectly on the tree, one of the most rewarding and relaxing things to be doing on a dive. This was not the mission for these dives however, we were in charge of cleaning off the coral trees that had already been strung up. So we got our wire brushes and tools and started cleaning. The amount of oysters and algae that had accumulated was fascinating. The ocean never leaves something uncovered. As we were brushing we encountered dozens of yellow tail snappers. They were very hungry. This was good company though and reminded us how many fish there are in the ocean. They did not really understand personal space however, as one of the little guys literally bumped into my mask. They definitely left nothing to be wasted. Anytime we scraped off something they saw as food, they jumped at the opportunity to take a bite. Taking care of our little coral friends was great!

After the third dive, most of the Nauts could be seen almost falling asleep from the hard work they had done. I, however,  was more than ready to do a fourth dive. How often is it that we get to dive in the Keys anyways? Not often enough. Luckily Mr. Brooks and Mr. Foisy were in agreement, so we went down for another dive. This dive was special. We couldn’t go to the MOTE coral nursery without a visit to Zack Morris’s plaque after all. We picked up brushes and swam to the plaque. As we cleaned the plaque off I reflected on how special everyone at SCUBAnauts is. Honoring those who are no longer with us brings the memories and legacies of generations of SCUBAnauts that came before us and the many more to come.

Not a Minute Wasted 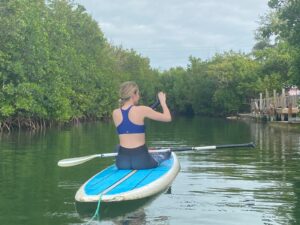 The nauts didn’t get enough time on the water out diving, so a short paddle was in order that night.

As the day came to a close back at the Mote dorm, we set off on a short paddle to see the sunset in its entirety right outside the canal. There were a thousand colors! It was not a Tuesday but luckily that did not stop Mrs. Mirman from making some amazing tacos to satisfy our large appetite from all the fun we had so far on the trip. Boy were they good. We all tucked in early to get a good night’s rest after a good day of diving and were ready for whatever was to come.

In the morning, Mr Brooks informed us that the conditions were unfavorable for diving due to high winds and waves. This did not stop us from learning or having fun however. After a delicious breakfast, I and a few nauts set off on a morning  paddle to the mangroves. Nothing lit our spirits up better than time in the sun and water. After the paddle we stopped in across the canal from Mote to speak to the legend himself, Dr Vaughn, who started the entire operation that we work on in the coral nursery. It was awesome to speak to him and learn from his wisdom about all of my different curiosities. He showed us his new coral tank prototype, signed copies of his book for Sierra and Mr. Brooks, and even showed me his sailboat that he has been working on upgrading to it to an electric inboard motor. He is an inspiration to all of us so it was such a fortuitous opportunity. Hopefully we will get to do more with him in the future!

Then we set off on our mini road trip. Our first stop was the turtle hospital. What more fitting than learning about a way to save the animals that come from the ocean we are trying to save. The tour was fascinating and upsetting because of the number of threats there are to turtles including water pollution, fishing, and boats to name a few. After our visit to our favorite turtle friends, we headed off to the famed Key West.  After learning about the historic downtown, saying hi to the chickens, going to mile zero of route one and the southernmost point of the continental US, we decided it was time for some ice cream. A sweet finish to a great day.

Day four we woke up to the positive news that we would be able to go diving. We set off to the MOTE coral nursery with our friends from Dive N2 Life. MOTE scientist Sam did a site assessment and concluded that the visibility was less than ideal so a game time decision was made to go to the Looe Key reef. This was a lot of fun because we got to explore the reef and found so many cool creatures including a moray eel, a turtle and a reef shark. I got to explore my creative side with a 360 degree GoPro, which will hopefully allow everyone to watch our dive in virtual reality!

This was an awesome trip that would not have been possible without the help of great leaders, scientists, volunteers, supporters, and great Nauts. Another smooth weekend thanks to careful planning preparation, and implementation. Thank you SCUBAnauts for making this all possible.