Today we went out with Emerald Charters and did 3 shark dives. 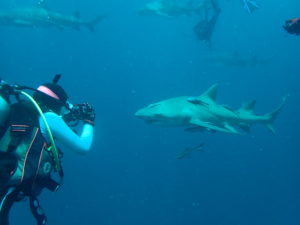 Sophia gets up close and personal with a lemon shark. These sharks were up to 10ft in length and came close enough to brush the divers with their pectoral fins.

The main divemaster brought down a crate of fish pieces to feed and bring in the sharks on each dive. Throughout our dives we saw lemon, silky, dusky, bull, reef, sandbar, nurse, and tiger sharks. We all went into the first dive not knowing what to expect or what we would see. As soon as we entered the water the sharks started appearing out of the abyss intrigued by the scent of the food. Throughout the dive, the sharks got more and more comfortable around us as we did of them.

After we ate lunch on the boat we jumped in the water for the third dive of the day. At first the only thing we saw was 2 very large-and-in-charge goliath groupers. One of the divemasters had to shoo them away so that they wouldn’t eat the shark’s snacks. After that, the sharks started coming in. Shortly after the first shark appeared there were half a dozen of them weaving in and out enjoying the free food. About half way through the dive, I looked over and saw a massive tiger shark emerge from the depths below. We had been told on the boat that in the rare chance we saw a tiger shark, we needed to keep an eye on it at all times. We were also instructed to push the shark’s head downwards if it was coming too close. 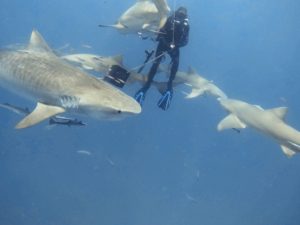 A 14ft tiger shark, Jenny, pays a visit during the final dive of the day

Once we saw the tiger shark, we all kept our eyes on it. It was much larger than any other shark we had seen thus far, and it was a rare sight to see. We all took full advantage of this shark being there and took a ton of pictures and videos, all while ensuring we kept an eye on our new friend. Once we got back on the boat we learned that the shark’s name was Jenny and that our divemasters knew her well. Overall, today was one of my favorite days of diving ever. Getting to be in the presence of such beautiful animals is unlike anything else, and I hope to do it again soon.