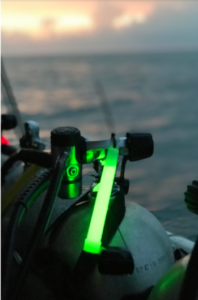 The Spooks Come Out at Night Dives

I was excited to experience everything planned on the SCUBAnauts’ summer trip to the Florida Keys with the exception of the night dive. Every night the biggest vertical migration takes place and I wasn’t sure I wanted to be in the middle of it . I had seen cool pictures of glowing sea creatures and heard about the squid that come up to eat and other rarely seen animals. I knew about hundreds of thousands of microscopic plankton that moved up in the water column at the end of the day and back down when the sun came up.

It all sounds somewhat magical, but the thought of  being in the water on a night dive with these critters and not being able to see what’s coming made me a little nervous. I was also afraid of getting separated from the group or getting stuck in an overhang. But the day had come, and we were scheduled to begin with a twilight dive. We gathered onto Captain Hook’s boat at 8:00 in the evening and made our way to a reef in Looe Key.

There’s Nothing to Fear

When I got into the water, it was better than what I expected. This reef was shallow: only around 15 feet. We toured the reef as the sun went down so we could have an idea what lay beneath during the night dive. It is around dusk that most of the fish are going to their hiding spots for the night. Diving around the reef, our group spotted a Moray eel and a lobster and a lot of fish congregating in overhangs and hiding in corals. The twilight dive was okay. There wasn’t much to look at since the fish were hiding and not much was going on. When we surfaced from the twilight dive, behind us was a very cool sunset, a big orange ball that sank so quick from the sky.

Taking the Plunge into Panic

People started to gather on to the boat setting up for the night dive. At the start of the night dive, we had to attach glow sticks to our gear so we were easily identifiable for our dive pros. We jumped into the water and soon made our descent to the same reef as our twilight dive, but this time all the creepy crawlies started coming out of their dens and began roaming about on the reef. We spotted large crabs, small worm looking things that were transparent and zipped about, and small fish that were still swimming around even though it was pitch black. Soon enough we were trying to fit through a small overhang. I started to freak out a little and felt like I was going to have a panic attack trying to fit through the small space. For a moment I thought that I got stuck on something, but I managed to get out.

From Panicked to Pleased, Night Dive a Success

For the rest of the dive, we stayed out in the open on the reef, which came as a relief to me. We saw mostly crabs and some fish. But now that I was feeling more comfortable, I was really hoping to see some glowing squid or sharks come to eat. Maybe we scared them off with all our lights. On our drive back, in the water we could see little, blinking, green dots. Soon a storm came in, and we were all being hit by oncoming drops that felt like sandpaper!

Night Dive Reflected in the Sky

After the storm cleared, we could see the night sky, and it looked like those pictures of space that you see on television. What I saw was really cool! Millions of stars, so clear you could see the milky way well defined. It was awesome to see. It’s what I imagined the plankton migration must look like if I could have seen it. In the end experiencing these two dives was great.  I loved it. I was expecting to see a lot more fish and strange animals . But there’s always next time. because yes, I’m ready to go again!