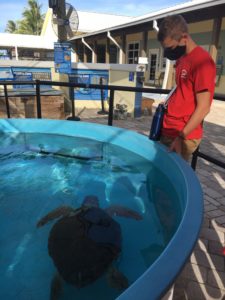 Earlier this week, we did the classroom portion of the PADI Sea Turtle Awareness Specialty Certification. We met Katie from the Loggerhead Marinelife Center who had a presentation for us which depicted a lot of new information about sea turtles that I had never heard before. One piece of information that I found interesting was the identification process of the different turtles. Hawksbill sea turtles have more “3D jagged shells then other turtles like greens,” said Katie. Another distinction of the hawksbills are the two pairs of frontal facial scales versus the single pair that the green sea turtles have. We also learned about how the Center takes care of the wounded turtles and when the classroom finished, we went to see some of the turtles currently being cared for. 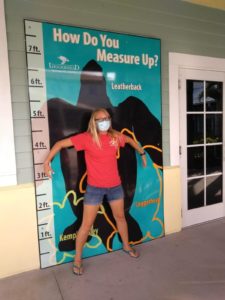 Leatherback sea turtles can grow to be 7ft in length! Much longer than even our tallest nauts!

First, we entered the hospital and saw where the surgeries take place as well as a green sea turtle who had a large hump who was in need of urgent care. We continued outside where we saw more of the larger injured sea turtles. The tanks had mostly loggerheads, which can be identified by their beefy heads and necks, but there were also many greens as well as a single Kemp’s Ridley. The greens typically have clean shells with a sunburst pattern. One green sea turtle had been injured by a boat and apparently the turtles sometimes get “floaty butt” where their bodies release oil near their ends. This causes the rear to become positively buoyant, so the injured turtle received a scuba weight to hold her down. Just like divers, the turtles who need this procedure start with a lot of weight and then get less and less to only have what they need. We also got to see a bunch of four-day old turtles and learned that only one in ten thousand actually survive to reproductive age. This may be caused by poor swimming ability or many of the natural predators that the baby sea turtles face. To end the tour, we measured ourselves next to outlines of a Kemp’s Ridley, green, and leatherback, which were seven feet tall making them the largest reptile in the world. Then Katie gave us a certificate of our official SCUBAnauts “adopted” turtle.

Today, we put our knowledge to the test identifying turtles underwater. We collected data on species, size, any identifying marks, and the turtles’ behavior. This information will be returned to Loggerhead Marinelife Center and added to their citizen science database. Over time, this data helps them understand the local population of turtles. We were incredibly lucky to see three species on our dives and more than 20 turtles in total! Sea turtles return to the beach where they hatched to lay their own eggs as adults, and it’s nesting season for loggerheads, so we saw a ton of that species as well as a few greens and hawksbills.