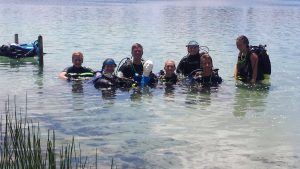 The first part of the dive involved practicing basic skills: clearing a mask, retrieving regulator, buddy breathing, etc. All the trainees performed these tasks without fail thank to the countless of other times SCUBAnauts has encouraged them to do so. Next, the divers practiced rescuing an unconscious diver under water which involved towing them to the surface and giving them rescue breaths while towing them to land. An added challenge to this was that the rescuer had to remove their gear as well as the victim’s. Each SCUBAnaut found a way to overcome this difficulty by either taking off their gear first, giving themselves more maneuverability, or by methodically undoing the clasps on the victims, and then their own, gear.

After all the drills the dive instructors took the students on a tour of the lake during which the trainees had to calm panicked divers and clear their suddenly flooded masks. After the eventful tour the nauts practiced a scenario where they had to find a lost diver underwater, using one of the two search patterns they had practiced on land, and then tow them to shore where their buddy was waiting with an assembled oxygen rig. The first group to go through the scenario was Noah, Blaine, and Sarah who quickly found the diver. Noah and Blaine then towed the victim to shore while Sarah swam ahead and set up the oxygen. The first group successfully saved the victim (with the help of a nearby SCUBA class “calling 911”) as did the second buddy team Emma and John.

At the end of the dive the SCUBAnauts were very tired from the physical activity but confident in their ability to prevent and respond to a diving emergency.