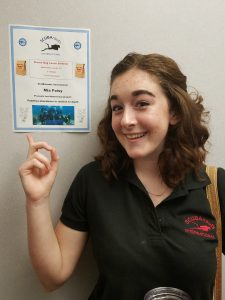 “Hey! That’s me!”Mia found an announcement of her Masternaut presentation had been posted in the elevator at Mote Marine Laboratory as she rode up to the Buchanan Classroom to relate her findings.

The project started in 2015. During a SCUBAnauts trip down to the Florida Keys, fellow Naut, Kylie B., and I chose our own project on which to spend the week: Palythoa. After our checkout dives, we noted that Palythoa was incredibly abundant on the shallower reefs but not as abundant in the deeper areas of the reef. We designed our own data sheets and collected data all week long to see if it would support our previous dive observations. Unfortunately, at the end of the week, we didn’t have enough data to support our hypothesis.

Flash forward to the spring of 2017 where I was trying to decide what project I wanted to do for my masternaut project. I decided to revisit the Palythoa project. I redesigned the whole project: data sheets, methodology, and hypothesis: Palythoa coverage decreases with depth. The project took a while, but I finally delivered my final presentation in February of 2018. It was hard work, but it was worth it. 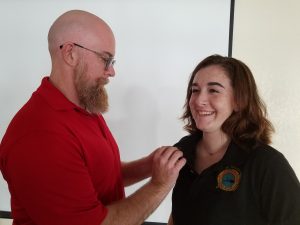 Being a masternaut means so much to me as it shows others that I’ve completed scientific research of my very own. During the process, I felt like a real scientist. I mentioned this to my advisory committee, and they told me something shocking. I am a real scientist! Despite its challenges, the entire thing was incredibly interesting.

Yes, I ran into a couple big problems, the biggest one being with the final data itself. The numbers that I got from some data groups were actually impossible amounts! I felt discouraged, and I didn’t know what to do. Part of me wanted to go back to the Keys and try to get all new data, but hurricane Irma took care of that plan. The longer I waited to do anything, the more I felt like I just had to scrap my data and give up entirely. I was nervous to call these adults with real jobs. Why would they have time to talk to me? Especially when my data was so unusable? After a lot of encouragement from fellow nauts and some other SNI parents, I finally called my advisory committee. They were… happy? Excited to talk to little old me? Yes. Yes, they were. With their reassurance and guidance, I eventually got back on track. They had the experience to show me different ways to look at my data besides how I had originally intended.  Writing the paper itself felt impossible and odd but after some help from another masternaut, Shaian Blanc, I wrote the first draft of my paper. After that, and a few rounds with a red pen, a masternaut paper (22 pages in all, but only 8 pages of text, the rest of graphs and charts) was born.

As for the presentation portion of the project, it was pretty easy. I have had a lot of experience (both in SNI and in my coursework) with public speaking, so this was probably the part of the project that came most naturally to me. I was fortunate to share my work with Mote Marine Laboratory in Sarasota during their brown bag lunch meeting. Scientists and interns ate while I talked and questioned me when I had finished. I was happy to see the friendly face of Dr. Crosby, the president of Mote Marine Laboratory.

Mia poses with her long-time friend, Dr. Michael Crosby, the president of Mote Marine Laboratory, based in Sarasota.

I was ecstatic to answer his questions to his satisfaction. I presented the project a second time to the SCUBAnaut regional meeting in February. The presentation was a little different because some of the statistical analyses had to be explained for an audience that had an age range from 12 to adult–vastly different from that of a group of scientists at Mote.

All in all, it was an amazing experience, and I would recommend it to anyone who is interested in conducting his or her own scientific research. It’s important to remember that you’re not alone when you’re doing this project. Your advisory committee is there to help you whenever you need it, and you should always remember that you can reach out to fellow nauts, volunteer SNI adults and other masternauts if you run into any issues. Problems can be fixed, and you don’t have to fix them alone.

If you would like to read more about Mia’s discoveries surrounding palythoa coverage, click palythoa_mfoisy_022018 for her complete masternaut paper.