Marine Debris and Invasive Species Removal in the Florida Keys

Coral reefs and other aquatic ecosystems around the world face a myriad of challenges, including climate change, marine debris, and invasive species just to name a few. In September, four Nauts from the North Carolina Chapter traveled to the Florida Keys to directly tackle two of these in conjunction with the Florida National Park Service in Biscayne Bay National Park. These advanced Nauts removed hundreds of pounds of trash from the reefs as well as dozens of invasive lionfish AND still found time to blog about it! See what they have to say about their experience!

“The fun! The fun we had fun travelling in a car for 13 hours!” said Dr. Janelle Fleming.  After a full, half day of travel from Morehead City, NC, we arrived at our AirBnB in south Florida. Later that evening, Mr. Chris Ceaser, our other chaperone for the trip, arrived to do chaperone things. Meanwhile, we Nauts were upstairs getting ready for an exciting day ahead of us tomorrow. Dinner was announced and we devoured 3 frozen pizzas, salad, and afterwards an assortment of frozen treats. Next we hit the sack for an exciting tomorrow.

Tomorrow would arrive bright and early, so we Nauts would get up at the crack of dawn to meet it.

We were mostly all up around 6am, except, of course, ALEX, and we received a great breakfast including bacon. After that, we drove to Biscayne Bay National Park Headquarters, where we met park rangers Vanessa and Shelby, two of Dr. Janelle’s previous acquaintances, as well as Mike, another very cool park ranger. After our introductions and a dive briefing, we boarded one of the Park’s boats and headed out for our day of lionfish eradication. We split up evenly into two groups, and of course, we did a boys-versus-girls style split up.

The dives went as follows: One team would take a 30 minute dive to hunt down lionfish, while the other team waited on the surface and worked as boat crew for the team diving. The teams would then switch and continue like this until a total of 4 dives had been completed. Of course, in good fun, we decided to see which team would get the most lionfish. After each dive, each team would send up the lionfish holder, a.k.a a zookeeper, and we would count, measure, and fillet our catches back on land. At the end of the day, the boys’ team totally crushed the girls’ at a 14-2 lionfish count. We then headed home and retired for the day after showers and a great dinner.

Today we would get up at the same time as yesterday, and yet some of us wouldn’t get up until just before we had to head out. Dr. Janelle made us another wonderful breakfast of eggs and bacon, which we ate while preparing our lunches. We headed back out to Biscayne National Park, where we met up with our same crew as the day before. After loading gear and tanks, we started on our way to Fowey Reef, where we would be collecting debris to be categorized and weighed.

Our dive plan remained the same for the most part, the only difference being that one team would go for a 30 minute dive and send up goodie bags full of trash with a lift bag and the team that was topside would sort the trash and measure it if it was rope. A total of 5 dives were completed. The first team to go down completed 3 dives, while the second team to go went on two dives. Today’s wager would be on guessing how much each of us thought all the trash and debris weighed in total. Mike won with a guess of 600lbs and the total weight coming out to 597.5lbs. We made our way back home where we would shower, do some school work, and Sammy would take the rest of our leftover lionfish and make fried fish for dinner. 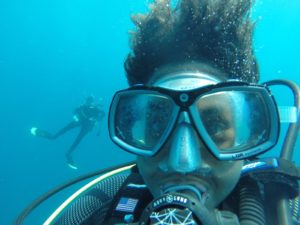 On this day, I (Bryn) was unable to dive, due to an unfortunate sinus issue. Alas. The dive plan remained much the same as the day before, though we were unable to have one team complete three dives due to time constraints. We also had to use a different boat from that of the previous two days, since it had had engine problems on day three and required repairs. Today, we dove on a reef that was farther south from Fowey Reef. This meant that there was less trash on this reef, due to the increased distance from Miami. Because of this, our dives were not focused solely on trash collection, but rather on both lionfish population mitigation and trash collection.

Our boys’-team-girls’-team lionfish haul was more evenly split this time, though I can’t recall the exact numbers. The boys still won, but it was a much closer victory this time around. After we finished our last day of diving, we rinsed our gear thoroughly and brought it back to our lovely AirBnB, where we let it dry until the very last moment before packing it into the van. Next up, a long, long drive back to sweet, sweet home.