In the News: Kids, wounded vets join to restore coral in the Keys

Theirs was a team effort during Mote Marine Laboratory’s ongoing coral restoration project: Dove held the fragment with his left hand, and Costello used both hands to cinch the zip tie — retired Green Beret Staff Sgt. Dove lost his right arm below the elbow and right leg above the knee to an improvised explosive device June 9, 2012, in Afghanistan; retired Green Beret Staff Sgt. Costello lost his right leg above the knee Sept. 20, 2011, when he stepped on a landmine in Afghanistan.

“We had a briefing this morning about how to do the zip ties; Billy and I teamed up, and we didn’t know what to expect,” Dove said. “Once we swam down, we both knew what to do: I held the fragment; he did the zip tie. We did one after another, bam, bam, bam. We knocked them out.”

Costello and Dove and Costello are members of the Combat Wounded Veteran Challenge, an organization founded in 2010 to improve the lives of wounded and injured veterans through extreme outdoor activities; previous challenges include climbing the 22,837-foot Aconcagua in Argentina, the highest mountain in the Western Hemisphere, and crewing a 75-foot ketch on a 10-day voyage from Key West to theDry Tortugas.

Last week’s challenge was to help with Mote’s coral restoration project by planting coral fragments on the reef. 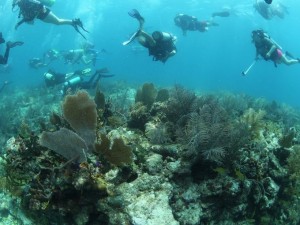 “We get a lot of benefits from the challenges,” Costello said. “It’s part of the healing process. Coming together with like-minded individuals to do a task, working toward a goal, is when healing happens. There’s real satisfaction in being part of a team that accomplishes a mission.”

Dove learned about the organization two months ago, right before he underwent major surgery, from retired Green Beret Sgt. 1st Class Chris Corbin, who lost both legs below the knee in 2011 when he stepped on an IED during his third tour to Afghanistan.

“Chris said, ‘Hey, you want to do this scuba thing?’ ” Dove said. “I said, ‘Heck yeah.’ I was really excited. It does a lot for us to be around people with shared experiences and hardships. When we’re together, we’re not the odd balls. We’re a team.”

Retired Army Spc. Garrett Cooper suffered a traumatic brain injury in 2007 in Iraq when an IED destroyed the truck he was in; after he got out of the service, he went on several solo expeditions, including a seven-month motorcycle trip through South America. 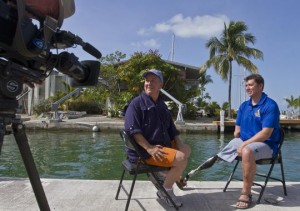 “I didn’t realize it, but I was kind of messed up, and those expeditions are sort of what fixed me,” Cooper said. “I heard about Combat Wounded Veterans, and I’m here because I want to do expeditions with them. I really like what they’re doing, and I hope I can be of some value to the team.

“I don’t think anybody here is interested in having a vacation. We’re all here because we have this mission of doing the research and of improving the lives of other veterans. We all buy into this idea.”

For the fourth consecutive year, wounded vets teamed up on the Mote project with members of SCUBAnauts International, divers aged 12 through 18 who participate in underwater conservation projects.

“What I care about most is the ocean,” said Cole Kolasa, 17, of Brooksville, who has been a SCUBAnaut for five years. “I really got involved in 2010 after the BP oil spill, and my ambition was to figure out what I could do to help the ocean and encourage conservation of reefs and coastal ecosystems.”

Staghorn and its relative elkhorn coral are important species throughout the Caribbean region because they are fast-growing reef-builders that provide habitat for many marine species.

Over the past 30 years, staghorn and elkhorn populations have dropped by 97 percent; reasons for the decline include diseases, pollution and climate change.

Mote’s goal is to jump-start staghorn recovery in the Keys by growing coral fragments in its underwater nursery near Looe Key and planting them on the reef — about 150,000 are now growing in the nursery, and 7,500 fragments have been planted, with a 75 percent survival rate

“We can grow more coral in our nursery than we can out-plant,” Erich Bartels, manager of Mote’s Coral Reef Monitoring and Assessment program, said at the morning briefing. “The limiting factor is having enough bodies and hands to out-plant the fragments. That’s where you guys come in today.”

The main method of reproduction for staghorn coral is asexual fragmentation: New colonies form when branches break off an existing colony and reattach to the reef, so each fragment planted last week could become a new colony.

“This is very high-tech,” Bartels said. “We’ve pounded 3-inch nails into the reef, and you attach fragments to the nails with black zip ties.”

In an hour-long dive, 20 veterans and 20 SCUBAnauts planted 250 fragments on the reef while being swarmed by newspaper and television photographers and videographers.

“It was hectic,” said 14-year-old SCUBAnaut Zachary Haeberle of Palm Harbor. “The most people I’ve been in the water with is about 10, and there were 50 out there. There were people all around. That was one of the hardest dives I’ve ever done, and it was one of the best.”

“It was great; I loved it,” Cooper said of the coral dive. “The thing I like about diving is that you’re stepping into another world. Everything is completely different. We’re human beings. We’re land animals. We’re not supposed to be underwater, and to be underwater changes everything. It’s about being in a new environment, training for a new skill.

“The training aspect of the challenges is helpful because these are action-oriented people, and the action gets taken away from them, or they have the perception of the action being taken away, and then you put them in an environment where they need to train more and go into something new.”

A big part of the coral restoration project is the connection between the veterans and SCUBAnauts.

“I really like working with a young group of kids,” Dove said. “In a time when there is a shortage of positive role models, veterans can be role models for the next generation.” 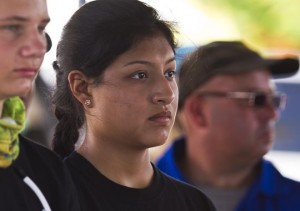 Sofia Alaniz, 18, has been a SCUBAnaut for seven years and will attend FGCU in the fall.

“It’s an amazing opportunity to be part of their lives,” she said of the veterans. “They’ve changed our lives by showing us what it means to serve our country and to never give up. I feel so lucky to dive with them, and I want to show them what younger divers can do.”