The first week of June, ten SCUBAnauts traveled to the Florida Keys for a week of diving. This was a special trip, because none of the nauts had been on a summer mission before, and they were scheduled to undertake 24 dives in just 7 days! Each team was responsible for developing and executing a science project with some dives to support our coral restoration partners sprinkled in the middle. See what Crystal River naut Lena has to say about the first three days. It’s not just about the diving! 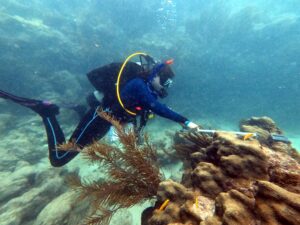 Lena estimates the size of a coral colony in order to mark her study site and count fish.

The next day we had four dives planned to work on our science projects. The boat ride was very choppy and there were storms in the distance, but not close enough we couldn’t dive. It was an amazing dive, but during the dive the captain gave a recall because the storms were getting closer, and we all surfaced and it was crazy. The waves were pretty big and it was very crowded. It was very stressful at the moment but I feel like we did pretty well for a very stressful surface.

On Wednesday we got to work with Reef Renewal and we got to clean coral trees made out of PVC pipes which was fun. 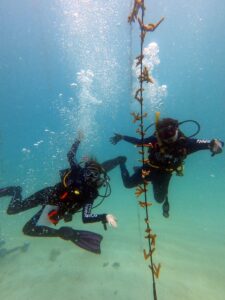 Lena and Shalalai with their completed vertical nursery. These fragments of staghorn coral will grow quickly suspended in the water column then be placed on the reef where the rope will biodegrade.

There was a fish named Scrawly. He was a little wonky but he was cool. There wasn’t a lot of fire coral thankfully on Reef Renewal’s coral trees, so it was pretty easy to clean them. After we cleaned the coral trees, we got to frag coral in a rope then release it so the coral could grow. That was so fun! My dive buddy Shalalai and I got to do a little photo shoot with our coral rope because we were the first ones done. That was fun and we took out our regulators to smile, which was probably my favorite part.

After all of the coral work we got to go to a beautiful reef and rip up palythoa, which was so fun! We got to see a lot of baby starfish while ripping it up, and we got a lot of palythoa too. Palythoa is an aggressively growing invertebrate that takes up space from new coral outplants to grow. We ripped it up to make room for new corals Reef Renewal is putting out.

And now finally the land part. All the girls discovered that our house had a pool so we swam in the pool a lot. And some of the girls had a dance party to “Hips Don’t Lie” in the kitchen. We bought some s’more supplies and had a bunch of s’mores which was amazing. And we watched the movie Encanto and it was interesting. But overall it was very fun and an amazing trip!