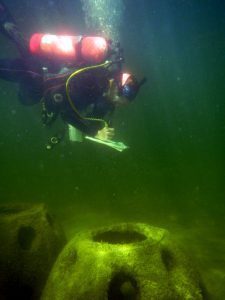 My first reef ball survey dives were earlier this year in July. I was briefed on the data that we were looking to collect and went to work.We conducted two types of survey. The first one eas a general roaming fish survey of any species present near the reef balls. This survey was extremely easy to complete as it is identical to the surveys that SCUBAnauts conducts in the Florida Keys every summer except the species are relevant to the Gulf rather than the Keys. The other survey that we conducted recorded the percentage of drift algae present in the every fifth reef ball and the size of grouper if there were any present. The purpose of this survey was to see if there was too much algae accumulating in the balls. If this were true, the future set of reef balls the county deploys would be moved to a different location so there would not be so much accumulation.

SCUBAnauts collected this data on two separate sites in July and October to see if the balls had progressed any. The county is still reviewing that data, but I believe that there was a significant increase in the amount of fish present on the sites between the first and second set of dives. It’s important that we aid the county in this work to help create more habitat space for these species that are native to our local gulf. I am looking forward to continuing to participate in this project with Hernando county.