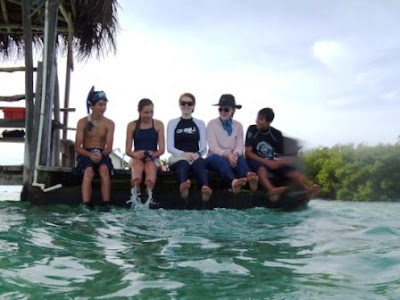 After all the traveling yesterday, plus the fact that Belize doesn’t use daylights saving time and sunset arrived at 6:45, most of us went to bed around 8:30 or 9. And with the sun rising at 5, the whole crew was awake and ready for the day by about 6 am. I know most of the parents of the kids on the trip will be amazed to hear that!

Diving on Glover’s Reef Atoll did not disappoint. Our first dive was fairly shallow, with our maximum depth at 30 feet. We wanted to use this dive to get acquainted with any special Belize differences on the reef. Since most of our dives back home on the Springs Coast of Florida only go to 15 feet, 30 feet is a depth we’re not used to. We got a chance to explore Bev’s Reef, an area right outside the protected inner lagoon of the atoll. There were many more species of coral and fish than we’re used to seeing, and the amount of coral was much higher.

The second dive of the day has gone down in the log books as everyone’s favorite, or at least top five. In a similar area to the first dive but over the side wall of the atoll down to 60 feet, we drifted along checking out overhangs, looking up valleys that headed towards shallower water, and stared over the edge of the wall into darkness. The leading part of the group even got a chance to see a pod of dolphins swim by, and two or three sea turtles also made appearances.

In between dives, the kids are enjoying the island location, snorkeling out a few hundred feet in the shallow lagoon waters. There are reports of small patch reefs with large coral colonies, and a wide variety of fish.

The third dive of the day was back to Site 1 (Bev’s Reef). But instead of taking it easy and exploring, we started our science surveys. Three groups of ‘nauts were formed, one to perform a point-count survey method to assess the dominant benthic cover; the second group used a belt transect, measuring and identifying corals along a one-meter wide belt; and the third group swam around the reef and identified and counted fish species. Since this is the first time some of the ‘nauts have used these methods, it was important to try them on a shallow site and work out any problems that popped up. The kids have chosen to specialize in one of the three survey methods. This will allow them to become pros, and the TS chapter can rely on them in the future to teach younger ‘nauts the survey techniques.

After quick showers (very rustic conditions), and a delicious dinner, we held our final science meeting of the day. The kids reported on what they saw, what successes they had, and what challenges they faced. The rest of the night was spent looking up corals and fishes in ID books in order to learn more about them.

Our first dive was so cool! First time seeing a lot of corals (like Staghorn, Mustard Hill, and Pillar) and fist time seeing Triggerfish and Lionfish. It was really cool watching the parrotfish eat the algae off the coral skeleton. Colin and I went snorkelling after our first dive and saw Boulder Brain Coral, which seemed like it was confused, and there was fire coral everywhere. Our second dive was really cool, too. There were dolphins swimming above us and we saw a couple of sea turtles. I saw another Lionfish and lots of shrimp. Our third dive was at the same location as our first except Danny and I did the coral survey together. I felt so cool knowing the corals. I wouldn’t have had a chance at that survey a few months ago. I liked seeing the lionfish, since I hadn’t ever seen any before (even though the are invasive to the Caribbean) and all the corals looked like they were straight from my study guide. I’d been used to seeing only 4 or 5 corals in the Gulf of Mexico but here I’m seeing like 20!

On the first dive we dove at Bev’s Garden. I was amazed at how clear the water was and the color of the water was so blue. The water looked like it had just come out of a movie. The first dive I did not see a lot of fish but there was so much coral. It was so beautiful. The second dive was a lot better it was a 60 foot dive at Long Key Wall. Right as we were going down, I saw a Green sea turtle. It was a big one too. While we were swimming along we saw another turtle and when we were following it a dolphin swam right over it and following it was about 6 other dolphins!! It was an awesome sight. That dive I saw a lionfish for the first time. They are not as cool as people said. The third dive Conner and I did coral surveys. I had a good time.

The reefs of the Springs Coast, Keys and Belize (thus far) are immensely different in many ways. While the roles the organisms play are consistent, the players – and sheer quantity – are vastly different. The species diversity is incredible in Belizean waters. For example, I saw Blue Hamlet, Indigo Hamlet, Creole Wrasse, and numerous parrotfish that I have not seen since the Bahamas in 2008. The coral is also healthier, larger and more numerous. There is Porites porites, Montastraea cavernosa and M. annularis, Porites astreoides, and oh so much more. I also saw Acropora cervicornis and Dendrogyra cynlindrus for the first time. In addition to the stony corals, I saw many octocorals, including sea fans, sea plumes and sea whips. I also saw a variety of sponges. On the second dive I saw two sea turtles, one of which was a Hawksbill. I did a fish count on the third dive. Unfortunately I saw a few lionfish on each dive 🙁