I recently joined SCUBAnauts International in January 2021 and received my Open Water Certification in April. I wanted to be in SCUBAnauts so that I could see marine life and learn about the science of the ocean. Other than the 4 dives for open water certification, I had only dived three times at Devils Den in Florida to practice my scientific diver skills before going on the North Carolina trip. I was excited to experience something new. 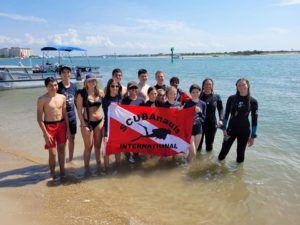 Florida, Georgia and North Carolina nauts all got to dive together this summer in Morehead City, NC. Most of these nauts had never met before!

The first few dives in North Carolina were at Radio Island. On the first dive, visibility was so low that I could only see my hands. My group practiced skills underwater while the other groups cleaned coral. Sometimes, a couple people in my group would drift away from view and I would only have the rope and my dive buddy to keep me company. This fear of the unknown was a recurring theme for most of the dives on this trip, but none more so than the next dive.

An Added Layer of Difficulty

The night dive was the one I was most excited and yet terrified for. As my group waited to descend, we floated under the darkening sky. The water went from murky brown to pitch black. I waved my hands in the water and bioluminescence sparked like fireworks from my fingers, like magic!

When it was finally time to dive, my partner gave me part of her dive equipment to hang on to. The visibility was only slightly better, but that made no difference to me. My excitement turned into panic as we went over the jetty. I held my partner’s gear like it was my lifeline. A rock suddenly appeared that I had to dodge, and there were so many sea urchins where I wanted to put my hand. I was too panicked to notice the marine life and I made the group surface twice. It was a nerve-racking experience, but I would do it again to get myself used to it. 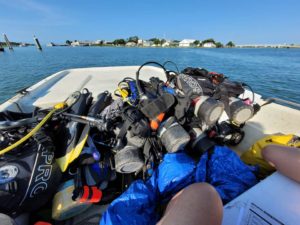 Diving at Radio Island isn’t easy. Gear is assembled and loaded into a small boat for transport. Divers then drive around to meet the boat, unload the gear, test it, then shore dive at exactly slack high tide.

The next dive was the same as the night dive but in daytime. I was more comfortable and never surfaced once. I had more opportunity to relax and spot fish. The fourth dive was supposed to be a boat dive, but the conditions did not support it. Instead, we went to the Train Trestle. For some reason, I could not get myself to stay down. It took me 21 pounds total for me to stay under the water, so it was a nightmare walking with so much weight back to the parking lot. The advantage for low visibility is that I could practice my navigation without using landmarks to help me.

My first boat dive was not a great first experience. I got seasick but I did not want that to stop me from diving. The brilliant blue water spread for miles and the coast was long gone. As I descended the anchor line, I could see the shipwreck of the Aeolus becoming clearer and clearer. I was 85 feet below the surface. So many fish were gathered, and my excitement grew with every fish I saw. My fun was cut short as we had to ascend. 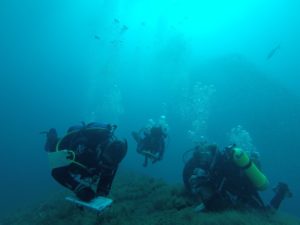 Nauts collect fish and benthic data on the wreck of the Aeolus. This will be part of a comparison over time, as well as a comparison of local inshore and offshore wrecks.

It was a chore getting back on the boat because I had to climb a ladder with my fins on. Instantly, the seasickness took over. Let’s just say that everything had to come out! One of the divers on the trip gave me some great advice. If you get seasick easily, lay down. I tried it and I felt so much better. As soon as I wanted to sit, the seasickness came back. I chose not to do the second boat dive, which I was really disappointed about. Thankfully, another boat dive was planned the next day.

The second day of boat diving was more enjoyable. I practically laid down the whole time except for when we had to dive. The dive to the Hutton was shallower at 70 feet. Me and my dive buddy went off on our own and studied the fish in places where there were not many divers. Suddenly, I saw a shape moving from behind my dive buddy. As it came closer, I realized it was a sandbar shark! I shook my buddy’s arm and pointed to it. My divemaster also saw it and we both did a celebration dance. No other dive could compare to that one.

Wrapping Up In My Home State 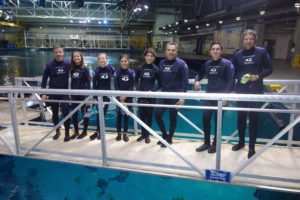 Georgia nauts pose at the top of the Ocean Voyager habitat in Atlanta before their dive with whale sharks and manta rays.

We wrapped up the trip with the Georgia Aquarium dive. We were given a backstage tour of the facility and we presented to the aquarium staff our findings and experience. When I finally dived in the aquarium, it felt surreal. I swam with two whale sharks and travelled the whole area of Ocean Voyager.

This experience has taught me so much about diving and scientific diving. In the end, I left as a better diver and with so many new friends and I cannot wait to see them again!

— By: Maya B., Naut-in-Training, Savannah GA