On today’s adventure, we found our way to a small but unique village on Catalina island. We explored a town called Avalon and dove a distinctive underwater park known as Casino Point Underwater Park. 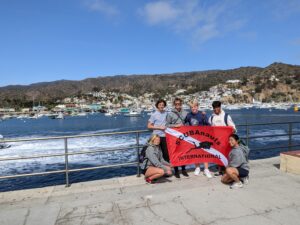 Six nauts traveled to Avalon on Catalina Island for four dives in one day!

We started the day on an hour ferry ride to the island. On this ferry ride we saw a variety of things from sea lions and dolphins to the Queen Mary, a retired British ocean liner. When we arrived in Avalon we began by feeding California’s state fish the garibaldi. After this, we picked up our tanks and headed to our dive site.

We started our dive day with just a quick little tour of the underwater park. These dives were special though because instead of our dive leaders leading us, we took turns leading the group ourselves. On this tour of this place we knew little about, we encountered all the many species famous in California. Some of these include the giant sea bass, many different species of kelp, and lots of garibaldi. After our tour, we surfaced for just a few minutes to discuss our survey plans then headed back down to begin the scientific part. 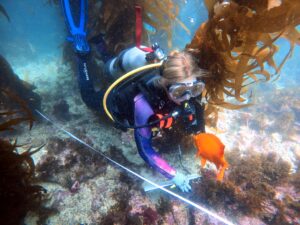 Kailey faces off with a garabaldi while collecting data along her transect.

This next dive we laid down three 15-meter transect lines right through the kelp forest. Our goal was to divide into three buddy pairs and do three types of surveys each on these lines. These three surveys consisted of an invert survey, which we counted all species of invertebrates on and two meters around the transect, an algae survey, which we counted the types of kelp on and two meters around the line, and a survey called UPC, which you observe the type of bottom, what covers it, and how tall it is on different points of the transect. After all three buddy teams completed all three surveys we surfaced for our surface interval. During this time we debriefed and briefed for the next dive.

This next dive consisted of the same thing, laying down transects and doing all three surveys, except this time we did thirty meter transects. Laying down the transects we saw many creatures we would not have seen in just regular diving. While placing down these transects, we are close to the bottom looking closely at everything, which caused us to see a cute little octopus chilling in the rocks and a couple California Eels. After this dive, we surfaced and decided to plan for a fourth dive. We had about an hour and a half surface interval while waiting for our tanks to arrive.

A Little Break, Then Back for More 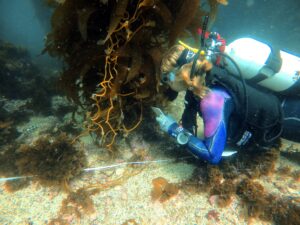 One of the three survey components of a Reef Check survey involves counting the stipes, or branches, of kelp.

Once they arrived we suited up and went in for our fourth and final dive of the day. This dive was similar to our last two where we layed transects, except we placed them out of the kelp forest this time. By being out of the kelp forest, we found that we saw a lot less species. Obviously less algae, and a lot less invertebrates. We ended this dive about twenty minutes in, when we finished our surveys. After we cleaned up, we went out to dinner in this small village and explored. Around eight thirty we had to return to the docks to board the Catalina Ferry, which ended our spectacular unique adventure on the beautiful Catalina island.