During our trip to the 2022 Capitol Hill Ocean Week event, the SCUBAnauts got the opportunity to speak to a variety of representatives from Florida. Among them was my personal representative, Ms. Val Demings. We spoke for around 30 minutes on any topic we felt was important to discuss, from manatee restoration efforts to fertilizer runoff to coral bleaching. In doing our civic duty of informing our representatives of their constituent’s needs, we managed to spread the name of SCUBAnauts International to yet another place. 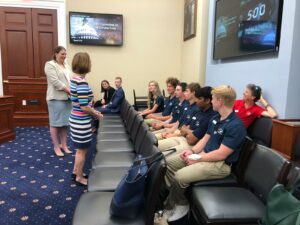 My favorite part of the trip, however, was sitting in on a hearing of an environmental committee in congress. As an individual who is interested in a career in politics, the debate was extremely interesting. It was fascinating to see how the vastly different agendas of the Republican and Democratic parties interacted on environmental issues. After the hearing was over, I managed to get a short conversation in with Representative Garret Graves (who looks a lot like Rob Riggle), and spoke to him about the increasing politicization of an issue that should be universal. One’s political affiliation should have no impact on beliefs in environmental concerns. 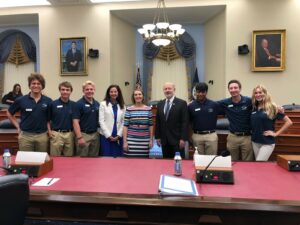 Nauts with US Rep. Kathy Castor, Administrator of NOAA Rick Spinrad, and Assistant Secretary for the Bureau of Oceans and International Environmental and Scientific Affairs Monica Medina.

The republicans took a more aggressive stance. Their questions to the speakers were based around numerical reasoning. They wanted to know exactly why each program and policy was being put in place. An example was Representative Dan Crenshaw of Texas’ 2nd district. He asked why the hogfish season for this upcoming year is scheduled to last only two days because he wanted to understand the reasoning behind this seemingly random number of days. He asked for numbers or statistics that support this decision and, receiving none, left the hearing early. The hearing (although not remarkably successful and productive) gave us Nauts an amazing look into the political innerworkings of environmental conservation.