On Wednesday and Thursday our group had a great opportunity to visit the University of Southern California (USC) Wrigley Institute of Environmental Sciences. 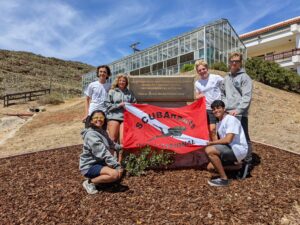 Leaving the dock north of Long Beach, on the Miss Christi, we made the 90-minute journey through the Pacific due west to Catalina Island; specifically, the USC campus located on the northern coast of the island.

Straight off the dock we were greeted by USC Dive Safety Officer Hannah Johnston with a simple tour of the campus and dive locker explaining how things would work for the time we would be there. While we were on the tour and then setting up our dive gear, we had two fantastic dive volunteers from the California Science Center, John and Thomas, who went on a dive to scout the area and set out transect lines for our dive which would be for survey training purposes. 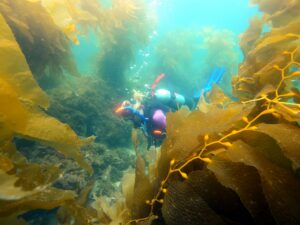 Day 1 at Wrigley consisted of short, practice surveys that were then compared against experienced science diver’s results.

After setting up our gear, we headed into the water with our buddy pairs and Eric Castillo, from the Aquarium of the Pacific. He led us on a quick tour through the kelp forest then to the area where we would run our surveys. This had a dive time of 39 minutes where we did surveys for a 15-meter transect for Reef Check Universal Point Count (UPC), invertebrates, and algae. After getting out of the water and getting our gear ready for departure, we got a brief tour of USC’s hyperbaric chamber. 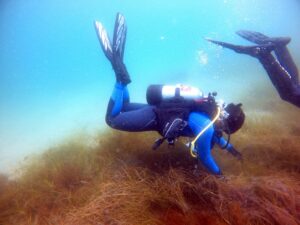 Riyan collects data on eel grass density following the methodology of an ongoing, long-term study occurring at this site. This trip exposed Nauts to a variety of disciplines, projects and underwater research methods.

The next day we left at the same time for the USC campus on Catalina Island. Starting early, we arrived and instantly got ready for the first dive of the day which would be a survey of UPC, algae, and invertebrates again. Today we went deeper into the kelp forest where there was a lot of wildlife which made our surveys a lot more interesting with the amount of data. At the end of the first dive, a giant sea bass approached us to check out what we were doing and followed us all the way back to the exit point.

Exiting the first dive, we all quickly switched our tanks to get ready for our second dive which was a bit different. We had a plan to start with eelgrass surveys and then move into a fish survey to finish it off. Getting into the water and beginning the eelgrass survey we found a horn shark sleeping on the sand and then later a massive ray was also just sleeping. Exiting this dive with a lot of data on the fish we recorded and enough air left in our tanks to start another dive we then began a new dive. 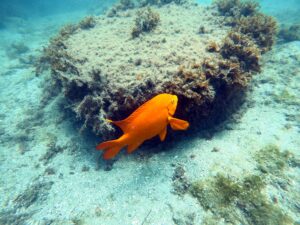 Garibaldi are the California state fish and were seen on almost all our fish surveys.

Moving to the other side of the pier, we then giant strided into our next dive which was also a fish survey. The third dive, although short, was eventful through the giant kelp with lots of Garibaldi, medium sized bright orange fish known in California, and rockfish of all different kinds. After packing up all the gear we left on the Miss Christi to end our 2-day experience at USC Wrigley.