On Thursday we were in a MOTE coral nursery, restoring and helping staghorn coral. We did this by splitting into 2-3 groups and worked on coral trees made of PVC pipe. When corals are in a high density, the spread of disease is more efficient, just as it is with human populations. In order to prevent this, we fragged the coral and hung them on new trees. This means that we cut fragments off of a larger coral and rehung the fragments onto a tree a couple meters away. This also helps the coral grow faster because it creates stress and causes them to focus on rebuilding/growing the break site. 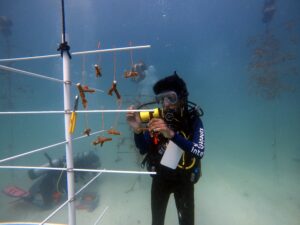 Shloke hangs newly cut coral fragments on a PVC coral tree where they will grow rapidly and eventually be replanted on a nearby reef.

In each group, 1-2 people worked on fragging the coral from the old tree by using a wrench type tool and cut a piece of coral about 4 inches from each coral. Then another 1-2 people from each group were working on putting the coral fragments on a monofilament rope that had two metal parts on in that we set up a few days ago so that we could hang the coral frags into the loops. It was shaped like a lasso and was orange. Once we put the coral in hole and tightened it, we crimped the second metal piece on the bottom so that the loop was tight and the coral would not fall out.

Then we set up those loops and another 1-2 people from each group took those loops from the basket and hung them up on the new tree that was a few feet away. They did this by putting one part of the line of the loop in the holes in the tree, then taking the other metal piece and crimp it on the top so it stayed. We had to put the coral in a specific configuration where there were 5 spots on each branch and it had to go on so that the first coral was low than the second coral was high and so on. This helped the coral grow because if there was a strong current, the coral wouldn’t knock into each other, also there was more space for the coral to grow.

We went on three one-hour dives to finish the transfer of the corals. In total, we created and hung more than 500 new coral fragments. If we finished early than we had to clean old trees with some brushes. It may sound easy, which some parts were, but there were some that were a bit challenging for me. For instance, the fire coral. It’s not actually a coral but it’s own type of species, but as the name suggests it would sting and it hurts if you come in contact with it. Luckily, that didn’t happen to me but that was more of a problem as I was trying to avoid it at the same time I was trying to do my job, especially because I was having a lot of trouble with my buoyancy control and kept uncontrollably ascending.

Besides the trouble, it was extremely fun scuba diving knowing that we are making a difference and making the future better by helping protect and grow staghorn coral that are in trouble right now. Truly something you must experience.

The next day, we experienced something incredible in the form of a night dive. When we woke up, we had an amazing breakfast then had a mini science lesson. Before we got to the night dive however, we had two afternoon science dives. On these two long dives, we collected data for our project. For my group, we are doing a project where we lay out a transect line underwater that is 10 meters long and has a point in the form of a zip tie every 10 centimeters. In our group we have two mini groups that collect the same data as the other group to increase efficiency. On the transect line, 1 person from each mini group swims beside and on top of the line and records was organism they see below that zip tie point and what state that it is in. For example, if we saw a live mounding coral, we would label on the data sheet as MLC. At around halfway, we would switch people. For most of the time I was camera man, but sometimes I switched for data so that we could all get a turn to practice our data-taking skills. 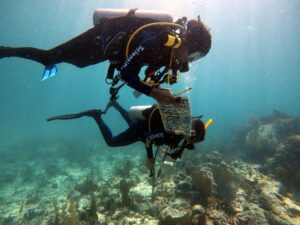 After we took our data and returned to the boat, we went back to the dive shop and had a late lunch in the form of delicious quesadillas and had a long little break of about 2 hours. Then we hopped back onto the boat for a twilight dive and a night dive. Before we went on those daring dives, we had to introduce a few new protocols. For example, when we are using the lights on the night dive we had to use different hand signals than usual and not to point our light into someone’s eyes.

On the twilight dive there was still natural light and we could still see without any hassle. For the twilight dive we were given a little BINGO sheet where it had corals and other organisms and photos that you need to take pictures of to complete the BINGO. During the dive, my partner and I had a bit of trouble equalizing which resulted in a little pain in my ear which then made me come up while my partner continued because the show must go on. When all of us came up, we started to get ready for the long-awaited night dive, which came in the form of preparing our dive lights and learning more protocols.

When we went in the water at night, it was also the same time a storm was coming in. Everyone was gripping their lights in their hands on while we took the leap. The color of the reef was amazing because we had artificial lights and the red and oranges really showed as well as the other colors. You don’t normally get to see these colors during the day, even with good visibility and sunlight. We also got to see some fluorescent coral that a dive master found with some purple light. At the end of the dive, I started having ear trouble again, so I had to go back to the boat early. While I was on the boat, everyone else in the water got in a circle and faced away from each other while facing their lights towards their chest and waving their hands so that they could see the bioluminescence. Also, at night we got to see a lot of animals that were not active during the day like an eel. This dive really changed my perspective on when to dive. It was truly an amazing experience.