Coral Outplanting in Morehead City – Weather and COVID Plan B:

In the midst of COVID-19, life goes on. The NC SCUBAnauts (that’s us!) planned a dive trip to prove this. (And also to put a toilet at the rock jetty. The usual.) We originally planned to have some of the Florida Nauts come up and dive with us, but seeing as Florida has become a COVID hotspot, that seemed ill-advised. So we dove with just our native Nauts.

We originally planned to dive at Radio Island Friday, Saturday and Sunday, and offshore Monday and Tuesday. Unfortunately, due to bad weather, the days we were supposed to dive offshore did not happen. This meant that we had to change our entire trip goal, which was kind of an inconvenience. Thankfully, our illustrious trip leader had a backup plan waiting in the wings.

When planning the trip, we decided to survey fish and invertebrates at five different dive sites (Radio Island, the Indra, the Hutton, the Ft. Fisher and the Tugs) and compare the data based on five different variables to determine the reason behind the species diversity and density at each site. Since we weren’t able to dive at four out of the five dive sites, this was impossible, so we decided instead to try something new: outplanting some of the corals from our older coral trees.

This tree was installed on the west side of Radio Island early last summer. 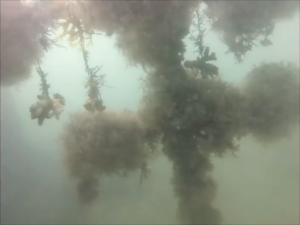 This coral tree was established more than one year ago and shows lots of algae growth. Nauts were able to harvest 8 fragments and outplant them to the nearby reef.

While some of the corals were missing from this tree (we were able to harvest eight or so of the original twelve corals it was installed with), the tree was mostly intact, as were the surviving corals. We were also able to harvest a few corals from the nearby coral table, which was left over from last summer’s experiments as to which design was better for growing corals.

Since we had access to corals ready to outplant, we decided to have the new trip goal be to outplant our corals to Radio. We spent most of Monday brainstorming methods of installing substrate for the corals to grow on, and Sammy put together the substrate once the design stage was finished. Our final design was fairly simple: Three cinder blocks, one at 10, 20, and 30 feet respectively, with four corals per block. The corals were attached via zipties around screws drilled into the cinderblocks. 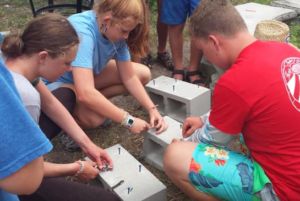 Nauts build outplanting devices from cinder blocks, nails, zipties and rebar. These will help attach small coral fragments to the reef while they grow.

The blocks were held in place underwater via loops of rebar through the holes in the blocks.

The rebar was actually something that we struggled with, as we all underestimated the tenacity of the sand at Radio. The original plan was that we could just lean on the rebar, bang on it a few times, and all two feet of rebar would just sort of slide into the sand. What we failed to calculate was that the sand of Radio is not merely sand – it has layers of packed shells, small rocks, gravel, etc. Instead of sliding the rebar into the sand, we ended up pounding on it for upwards of twenty minutes trying to get the bottom of the block level with the seafloor. When talking about the project later, we decided that if we used this method of outplanting again, one thing we would change would be to shorten the rebar.

We also wanted to come up with a new project for the upcoming school year, so we decided to outplant the corals at 10, 20 and 30 feet. This way, we could monitor the corals’ growth rates based on depth, temperature, and relative current to see which worked best for further outplanting.

Because we SCUBAnauts have an… interesting… sense of humor, we also decided it would be 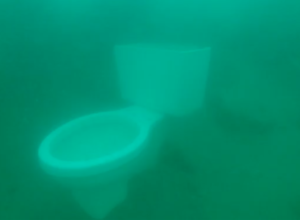 Nauts placed a toilet underwater as part of a unique substrate on an artificial reef.

fun to put a toilet down at Radio. Ms. Handy went to the dump and found the toilet, and we brought it under on Saturday. We even outplanted a coral on the toilet, in theory to monitor the growth rates on different substrates, and are hoping to get a sink and a bathtub to complete the set.

All in all, we had a fun trip, even though most of the project was spontaneous. We’re grateful to our most helpful trip leader for having a backup plan, even though the weather decided not to cooperate (for the SECOND YEAR IN A ROW), and we are excited for next year!