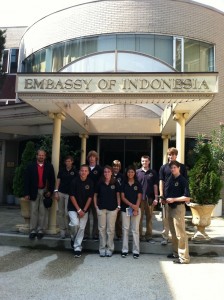 Cultural and physical barriers were overcome when the SCUBAnauts participated in video-conferences with Indonesian and Australian students. The ‘nauts visited the Indonesian Embassy in Washington D.C. and connected with young men and women who also desired to bring conservation issues to light. In skyping with the Australian snorkeling club, the depths of the ocean were further explored and compared; this providing further affirmation of the incredible world-wide joys the oceans bring.

SCUBA-diving is a distinguishable connection between friends, nations, and even family. Throughout CHOW there were many moments of inspiration and fascination, but none could compare to the SCUBAnauts’ virtual conference with Indonesian students at the Indonesian Embassy in Washington D.C. I had never felt so honored to speak on behalf of the Lake Hitchcock Chapter to students, and explain the dynamics of our ocean environment to them. I felt as though I was attaining so much information every second that I was in the conference room. I learned that Indonesia has over 300 official languages, and about 26 variations of those languages. The ‘nauts’ had the opportunity to exchange school concepts and see presentations by seven schools for “a better environment” from the Indonesian students. Being able to see such a wonderful culture, and draw my own inspiration from it was an experience I will never forget. Before we departed from the Embassy, we learned of several ways to get yourself a free trip to Indonesia including an art competition to create Batik (traditional clothing of Indonesia) and the Peace Corp. Because of SCUBAnauts, I was able to discover such a wonderful opportunity. 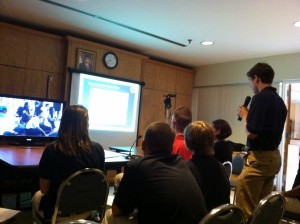 Today we met with the Indonesian embassy for a video conference, which was a great experience. Each of their schools had a series of things they were doing to make each school more environmentally friendly. Many of the schools have gardens and forests, including one that grows hibiscus plants that they use to make a medicinal tea to treat asthma. They also had floating cafeterias, where the students could feed the fish with the scraps of their leftover food, create wastewater treatment arrangements, and other efforts. It gave me ideas for things to try at my school. They also performed an amazing traditional dance for us.
~Sara Vannah, Lake Hitchcock Chapter 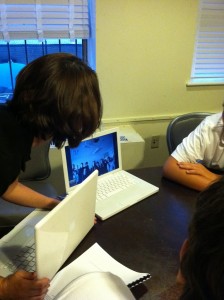 Thus far the D.C. trip has been pretty awesome. The whole trip has been very interesting, but I have to say that tonight has been the highlight of it all! We skyped with students in Australia doing the snorkeling equivalent of what we do with our diving. They were very entertaining, and it was interesting comparing the differences between our programs. They are very much an early version of what our organization was once. I was really interested in what they had to say and the science that they do. It was definitely a highlight for the trip and I look forward to keeping in touch with them and seeing how their program evolves and expands.
~Connor Waugh, Tarpon Springs Chapter