I had never been so excited for a 7:30 flight! The other Nauts and I arrived at the airport with anticipation as our new adventure was just beginning. 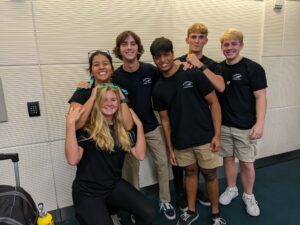 Despite a 5am meeting time, Nauts were excited for the flight to California and the adventures that await!

After a seamless transition through security and
boarding, we were all on our way to Southern California! After what felt like the shortest flight of my life (likely because the other Nauts and I slept through the majority of it), our plane touched down in Los Angeles.

For most of us, it is our first time in California, so everything was fascinating. However, we had no idea our next destination, Aquarium of The Pacific, would be so grand. We were greeted by Mr. Eric Castillo, the Dive Safety Officer of Field Operations. We were then taken on a backstage tour of the Aquarium’s operations and facilities. 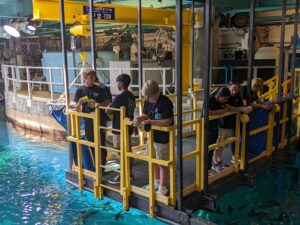 We were even given a view of a Marine Veterinarian at work and got to feed some of the fish algae flakes. We may have even tasted some ourselves. Following the end of our tour, we traveled to and settled into our Airbnb.

The next day, we rose early and headed off to our first dive at Veteran’s Park in Redondo beach. To say this dive was enjoyed by all Nauts would be an understatement. All six Nauts including myself were instantly captivated by diving in the Pacific. After we became accustomed to diving in much more neoprene than we usually need in Florida, we all had a great time on our check up dive as we explored the entirely different dive environment. Following the first, our second dive focused on calculating our Surface Air Consumption (SAC) rates. This allowed us to determine how our breathing changes across dives and different activities. For example, we calculated both our resting and working S.A.C. rates. 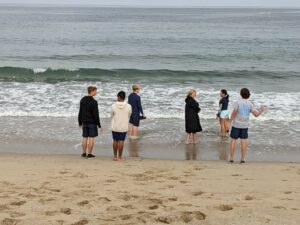 Nauts assess diving conditions and brace themselves for the 65 degree water. Assessing water conditions is an essential part of safely preparing for any dive, especially in a new location.

Our next activity of the day was touring the Los Angeles Port Police Underwater Division’s dive locker. All Officers were very welcoming and kind enough to even give us a tour of one of their response boats. This tour included Piloting an ROV and using sonar! These two days truly were a unique and amazing experience.