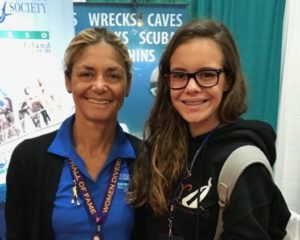 A few months ago, I submitted a scholarship application to the Women Diver’s Hall of Fame. In February, I found out I had been awarded the Ocean Pals Training Grant and I was invited to attend Beneath the Sea in Secaucus, New Jersey from March 22nd to March 25th to receive my grant. My grant provides funding for both equipment and dive training.

Beneath the Sea is a three-day SCUBA diving exposition that involves a number of activities including a trade show, seminars, workshops, and a film festival. The highlight for me was the Marine Careers Day where you get to learn about all aspects of marine careers and get to see how some of them work while hearing incredible people talk about what they do best.

On Friday, I attended the Marine Careers Day and heard many incredible people speak including Cristina Zenato, also known as the “Shark Whisperer.” If you have time you should definitely look her up – she’s awesome. On Saturday, my Dad and I went to the exposition and got lots of information from equipment booths, nonprofits, dive shops, and tons of amazing divers. I got to speak with Cristina Zenato briefly at her booth, and I was immediately fascinated with her work and who she is as a person. I got to listen to Stan Waterman – a shark conservationist and pretty funny guy. Also, I heard Valerie Taylor – a diving legend from Australia – speak, and she is one of the most fascinating people I have ever met. She helped invent the chain mail suit that shark divers still wear today. If that isn’t enough, she has helped film movies with sharks in them and has had crazy encounters with sharks. 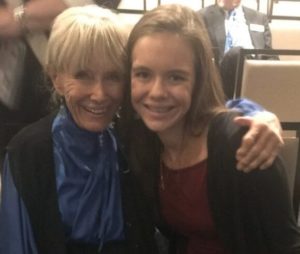 Valerie Taylor gives Sophia a quick squeeze. Valerie has spent her life as a diver with sharks and documentaries in the beautiful waters of Australia. She has quickly climbed to the top of this girls list of impressive people!

Saturday night was the awards dinner when I accepted my award along with the other scholarship winners and the 2018 Women Diver’s Hall of Fame inductees. A film festival was held after dinner and I got to sit down and speak with Valerie for over 20 minutes before the films started. Valerie told me how the ocean is dying and when it dies, humans will also die. She stressed how important conservation is and that we must tell people about the problems facing the sea. She surprised me when she told me kids my age would be the ones to save the ocean, and that it’s my job now. Valerie has done so much for the ocean, and I hope I can do even a fraction of what she has accomplished. The film festival had incredible videos that made me want to go diving. On Sunday, the Women Diver’s Hall of Fame hosted a brunch attended by some of their legendary members.

If I had to use one word to describe how I feel after that weekend it would be inspired. I am so thankful for the opportunity I had, and I know that those experiences and connections will help me for my entire life. I would encourage all of my peers to consider applying for the scholarship and/or attending the 2019 Beneath the Sea event.