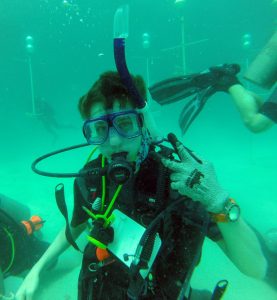 This summer I went on my first summer trip with SCUBAnauts down in the Florida Keys to do a number of recreational and scientific dives. I also had the pleasure of working with Mote Marine Laboratories.

My all time favorite part of the summer trip was the Coral Reef restoration program that we participated in with the Combat Wounded Vets and Mote Marine Laboratories. We helped with the regrowing and outplanting corals that were impacted by Hurricane Irma.

The work we did with Mote consisted of 5 dives over the course of three days. Four of the dives were at the Mote Marine nursery and the fifth dive was for outplanting Staghorn corals (Acropora cervicornis) onto Heroes Reef. For the nursery (where baby corals grow to be outplanted on the reef) dives, we weighed ourselves down with extra weights and went down in teams of two to three with at least one veteran and one SCUBAnaut in each team. Teams were assigned either to work on the coral trees, or to work on anchoring down the coral tree foundations replacing the ones that were carried away during Hurricane Irma. While working on the coral trees, teams would break up the larger sized corals into smaller pieces and then attach them onto an open space; this is known as fragmentation. Fragmentation has been scientifically proven to increase the growth speed of staghorn corals. When anchoring down the foundations for the coral trees, teams hammered the foundation 2 feet into the ground, anchoring it in the sand.

During the outplanting, each dive each team was responsible for the placement of 25 fragments of Staghorn coral that were taken from the nursery. The coral was then held in place with zip ties attached to nails affixed to dead corals or rock. The coral fragments were separated into groups of 5 of the same genotype. That way, they would later fuse together because they recognize themselves. The purpose of placing the corals into groups of 5 is 1) to speed up the growth of the coral and 2) to also give the corals a better foundation in which to grow together, making them less likely to be carried away in another hurricane or storm.

While on this trip I had a lot of fun and did many things I had never done before. I had never outplanted coral or done any physical work underwater. While I may have been tired here and there, I enjoyed myself a lot, and I would always go back if given the chance. 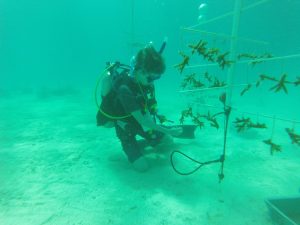 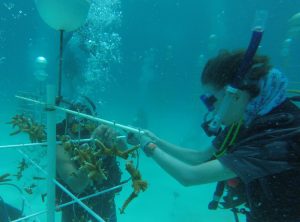 In the coral nursery, smaller pieces of coral are hung to grow before being fragmented for outplanting.