Lasers, Cameras and Drones, Oh My!

Over spring break in March, six nauts had the chance to participate in an 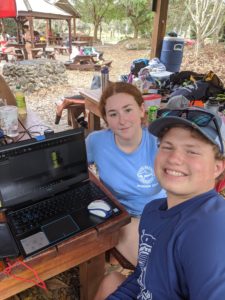 Braydan and Vivian show off their 3D model of a set of scuba gear.

underwater photogrammetry course taught by Protean Industries and hosted by Devil’s Den Prehistoric Spring in central Florida. The course lasted four days and included diving and topside activities each day. Nauts learned how to use videos taken by hand, underwater ROV and aerial drones to create 3D models as well as how to create hand-drawn maps of intricate “cave” dive sites. Here’s what Sarasota 2nd Class Naut Braydan has to say about his experience:

The photogrammetry trip was a great experience for those interested in engineering and computers with a mix of diving and data collection. The trip was very hands-on and we were active all day with diving, data collection, computer rendering, drone photography and review from morning until it was time for smores at the campfire. During the trip we learned how to use a laser to map surfaces underwater, and even on land, to help make 3D models of the room or objects being explored. 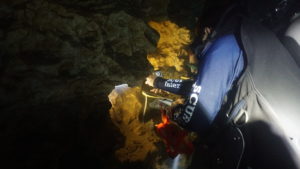 Another part of the trip was learning how to collect data points that would be used later to make the actual 3D model of the cave. Along with the diving, computers and lasers, we also got to explore the use of both aquatic and aerial drones. The aquatic drone could be used to go into caves and tight places divers could not go, help monitor the dive team and help communicate with the team on the surface.

The air drone was used to help map and take aerial pictures of the surface area. The photos, from both the drones and the divers, were used to make the 3D map of the cave and the area around it. Another part of the trip was learning to use the 3D software that could convert digital pictures taken on something like your phone and transform them into 3D objects that could later be 3D printed. During the trip we used this software to make a 3D model of a scuba set. These are all examples of photogrammetry at work! 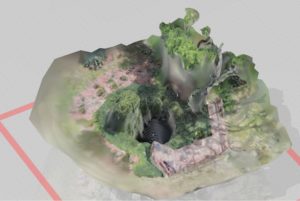 My favorite part of the trip was learning how to pilot both drones and how to take high-quality photos and videos used to make the 3D models of objects. In the future, we could use the technology to help make models of some shipwrecks or deep ocean systems that may not be accessible by people. Outside of our planet we could make detailed models of satellites or ships to understand if something may have happened or even what terrain a planet might have so we can one day explore. Overall, the trip was fun, and I would recommend it to anyone wanting to do computer work around diving with some fun activities in between.