A Look into the Legislative Branch (Blogs)

I had the opportunity to go to Washington, D.C. with SCUBAnauts Intl. for Capitol Hills Ocean Week for four days. During these four days we had a packed schedule consisting of meetings with senators and congressmen and women, also some sight seeing and of course the CHOW gala. Meeting with Abby Tinsley (Bill Nelson’s Legislative Assistant) was exciting because I got to explain the importance of the sea grasses that surround our coastlines in Florida and also how SCUBAnauts can help with the sea grass project. The most exhilarating event was the gala, where they presented awards to people all around the world for volunteering, leadership, and lifetime achievements. They also recognized SNI for their amazing work they do with the combat wounded veterans in the Florida keys and gave a brief explanation of what SNI is all about. Although this was my first time going on this trip, I’ve learned many speaking/leadership skills and experienced many things that kids my age, or even adults, have not been able to do.

Recently, SCUBAnauts intl. met with Congresswoman Kathy Castor. The group informed her of SCUBAnauts’ work with Mote Marine Laboratory, and the Combat Wounded Veteran Challenge to restore the coral in the Florida Keys. We also addressed the RESTORE Act on which Representative Castor worked on diligently. Congresswoman Castor looked to us for our unique perspective, as civilian scientists, as to possible uses for the funds, known as Pot 3, from the RESTORE Act. 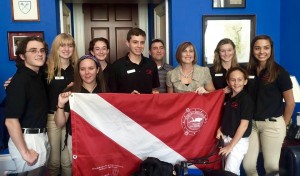 Deepwater Horizon, the movie which is premiering in September 2016 based around an oil spill crisis, is set to bring back public attention to an issue that is still plaguing us today. In the future, SCUBAnauts Intl. hopes to extend an invitation to Representative Castor about attending the premiere of the movie with SCUBAnauts. We also hope to organize a social media movement for the movie. SCUBAnauts would like formally thank Representative Kathy Castor for using her time to meet with and enlighten us.

Through my attendance at Capitol Hill Ocean Week with SCUBAnauts, I was given the chance to meet with all sorts of interesting people, many of which help run our country through the legislative branch. 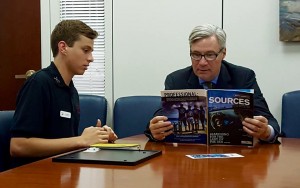 During these meetings with people such as Senator Sheldon Whitehouse, Representatives Castor, Representative Graham and The Ocean Foundation I discovered that the most important part of the trip for me was being able to interact with the leaders of our nation. We even got the chance to meet with one of the Combat Wounded Veteran Challenge members, Chief Petty Officer David Caras who has taught me with his mentoring to persevere constantly and work as hard as possible, no matter what gets in the way. I too, hope to leave a lasting imprint behind and maybe someday I will get my chance.

My participation in the trip has once again shown me that many of the members of SCUBAnauts Intl are the best and brightest out there. To sum up the words of Dr. Michael Crosby, president of More Marine Laboratories — “the SCUBAnauts are the future leaders of the world.”