As Nauts build their knowledge and skills in diving, science and leadership, they move through a ranking system. The prestigious rank of MasterNaut recognizes elite students who have achieved their advanced, rescue and nitrox certifications; conducted more than 100 lifetime dives, including at least 60 scientific dives; performed 150 community service hours; and completed a large-scale conservation or research project.

The MasterNaut project is a keystone of this distinguished rank. Students propose a research or conservation project then work with Science Education volunteers to develop the methodology, train their peers, then execute the project. Each project culminates in a written paper and two presentations– one within SCUBAnauts to their peers, and one external. This encourages students to effectively communicate about science to a variety of audiences.

Projects range from dive physiology to coral disease to the creation of training materials for fellow students. Many students are able to obtain grant funding for their projects and some have even gotten job offers based on their work!

Analysis of The Gulf and Florida Coast Lionfish Population 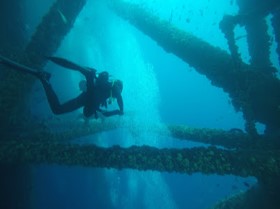 In order to gain a deeper understanding of the Gulf and Florida Coast lionfish population, this project analyzes the preferred habitat and conditions of various dive sites across the Gulf of Mexico, Texas Flower Gardens, and Florida Panhandle Coast. Research for this project was performed in the form of benthic surveys and roaming fish counts, both performed by the American Academy of Underwater Sciences divers using SCUBA. After analysis of data gathered, the conclusion can be made that Lionfish in the area thrive on man-made structures as opposed to naturally occurring reefs. 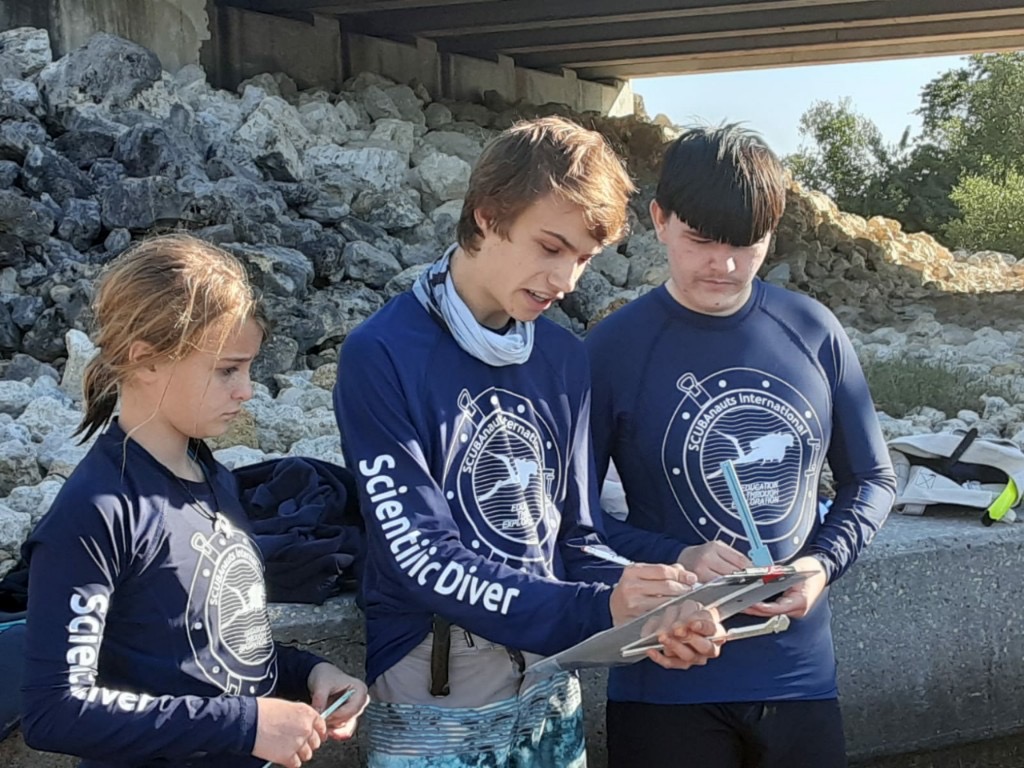 Oysters are vital in Tampa Bay, especially due to a huge loss in their population in the last 50 years. This project was based on assessing one area, three beds in total. The oyster bed surveys were conducted during December, January, March, and April of 2021. All the surveys took place at Perico Bayou in Robinson Preserve which is in Manatee County. There was a total of four surveys, two in winter and two in spring. The goal was to see if the oyster beds that were in Perico Bayou were viable. In order to assess the viability of the beds, the percent alive and dead plus shell length of Perico Bayou beds were compared with that of natural beds in Tampa Bay. Data were collected from four different oyster beds within the bayou throughout the year. According to the data, the average percentage of live oysters was about 32% and about 67% dead oysters. According to Gary Raulerson, who has a Ph.D. in Ecology and works for the Tampa Bay Estuary Program (TBEP), natural reefs have about 74% live oysters and about 25% dead oysters. Mr. Raulerson also stated that natural oyster beds have an average shell length of 4.0 cm, while the average for Perico Bayou surveys was 4.6 cm. The hypothesis for why there is a lower percentage alive in Perico Bayou is because of such a low flow of water through the bayou, they were exposed to the sun for too long, and their defecation accumulated. The reason for the larger than average shell length could be because the surviving oysters may be receiving more nutrients for themselves and not competing for those nutrients, over the natural beds with a higher percentage of live oysters. The data shows that Perico Bayou beds are likely not as viable as natural beds elsewhere in Tampa Bay.

Comparative Study of Seagrass Bed Habitat Along the Skyway Bridge 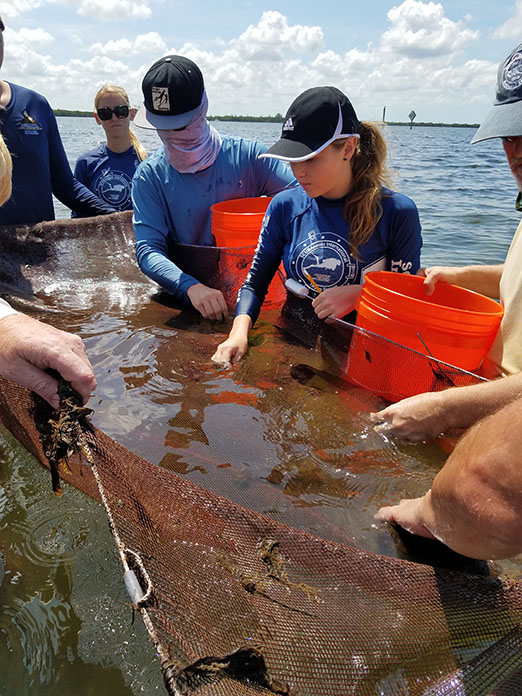 Seine nets, core samples, and roaming mollusk surveys were conducted in seagrass beds at three locations near the Skyway Bridge in St Petersburg, FL. The surveys were used to assess if the habitat in the mitigated seagrass bed was restored to the level of the habitat in the surrounding natural seagrass beds. The data set determined that the difference in richness and abundance of species found between the natural and mitigated sites was insignificant. Therefore, the habitat in the mitigated seagrass bed was successfully restored to the level of the surrounding natural seagrass beds. However, there were no living mollusks found in the roaming mollusk surveys, suggesting there could be a problem with the health of the habitat in all sites along the skyway bridge. Another concerning finding was that several mollusk species recorded at the site 10 years ago were not found, meaning the richness of mollusk species in the area has been decreasing since mitigation occurred.

The Implications of SCUBA diving with Air vs. Enriched-Air Nitrox on Mental and Physical Fatigue 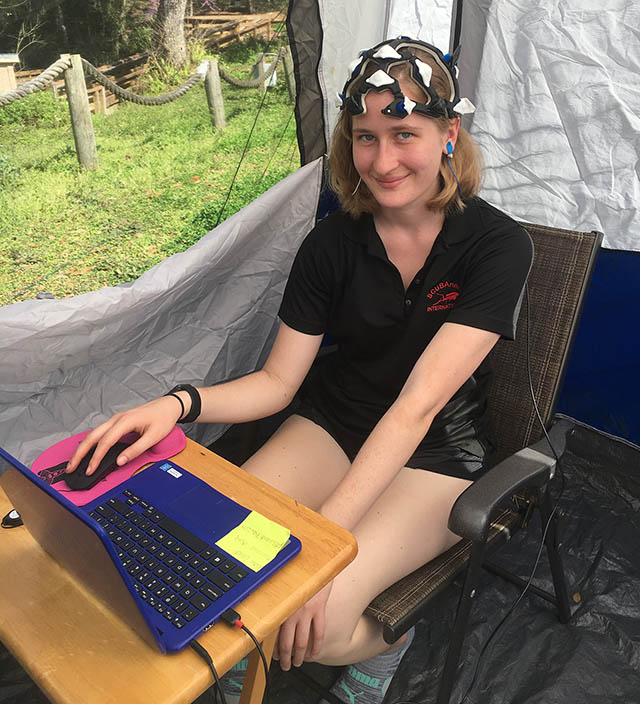 It is commonly “known” among SCUBA divers that breathing gas mixtures with an increased fraction of oxygen, called nitrox, reduces post-dive fatigue, however, little to no empirical data exists to support this claim. Those studies that have been conducted do not account for a placebo effect. This study aims to find whether the reported extra benefits of nitrox are due to the physical impact of the gas composition or a placebo effect that has permeated the SCUBA diving community.

Divers in a blind study breathed either a standard air mixture or a mixture of nitrox. Pre- and post-dive fatigue were measured using EEG brain scans and counter-movement jump tests. Analog self-evaluation surveys are also given pre- and post-dive to track subjective feelings of pain and gauge whether divers could consistently decipher what gas mixture they were breathing based on previous experience. Results indicate no statistically significant difference in post-dive fatigue between air and nitrox divers and most divers could not accurately determine which gas they were breathing.

A Comparative Study on Seagrass Coverage in Natural and Mitigated Sites in Tampa Bay, FL 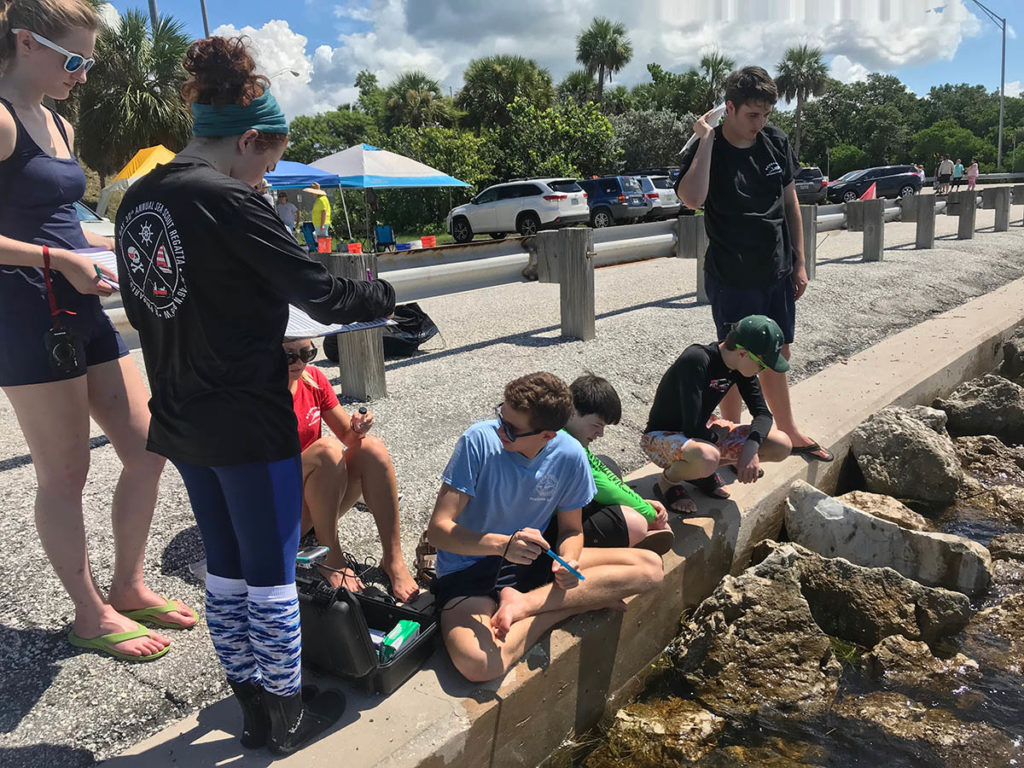 Seagrass coverage surveys were conducted at two locations along the South Skyway Bridge Rest Station during the fall to investigate growth over time of a released mitigation site and compare its most current coverage to a natural seagrass bed. Snorkeling surveys displayed that the mitigated site possessed slightly higher total vegetative cover than the natural seagrass bed. The released seagrass mitigation site had a coverage increase of 18.5 percent from 2011 to 2018, indicating seagrass mitigation efforts are indeed successful. Moving forward, it may prove useful to expand research to the other side of the Skyway Bridge to evaluate differences in seagrass species and coverage in the overall region.

A Practical Fish Identification Guide for the Florida Keys 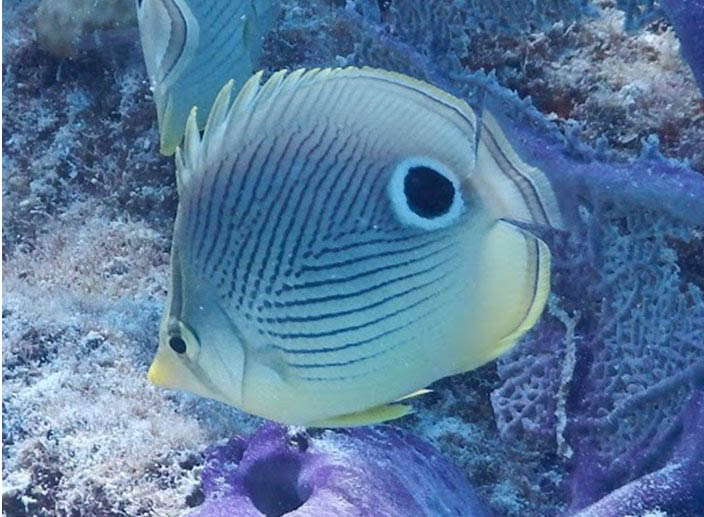 SCUBAnauts have been conducting fish surveys in Florida and other areas of the Caribbean for more than 15 years. Each year, we spend a significant amount of time learning and practicing our fish ID in the classroom and in the field, but traditional field guides ignore a critical portion of this learning process. I decided to collect my own pictures and create a new field guide because I felt it is hard to translate what you see in a professionally done photograph into the field where the fish may seem different because of natural variation in visibility, light, coloration, and distance. One of my main goals in this project was to make this field guide open to the public, which is YOU. Please enjoy this website and blog I have created to help novice and intermediate fish surveyors improve their skills!

Palythoa Abundance in Relation to Depth 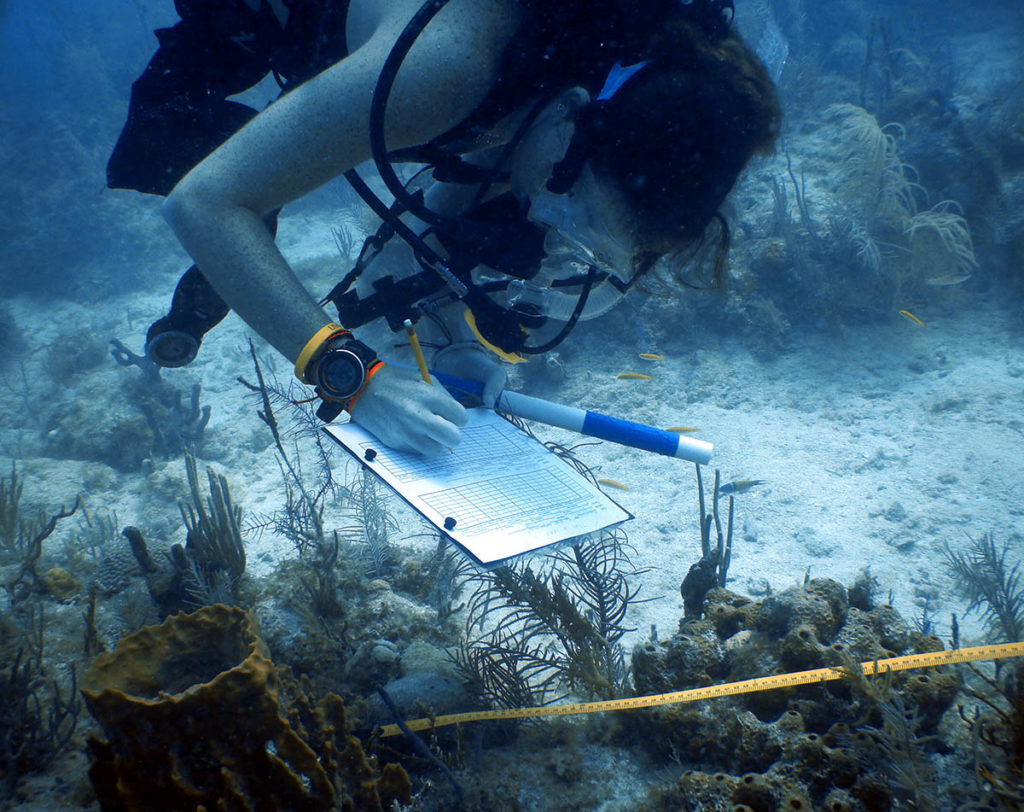 Palythoa abundance and coverage was quantified in June of 2017 at six different dive sites to research the hypothesis that Palythoa cover decreases with depth. Surveys conducted at Looe Key reef balls 12, 19, 20, 25, 33, and 34 showed that there was a small negative correlation between depth and Palythoa abundance as well as a strong negative correlation between depth and Palythoa coverage (as depth increased, Palythoa abundance and coverage decreased). Aproximately, 58% of average area of Palythoa coverage per transect was explained by the average depth per transect. Approximately 29% of the number of Palythoa colonies were explained by depth. When continuing this research, methodology should be revised to prevent errors in data. 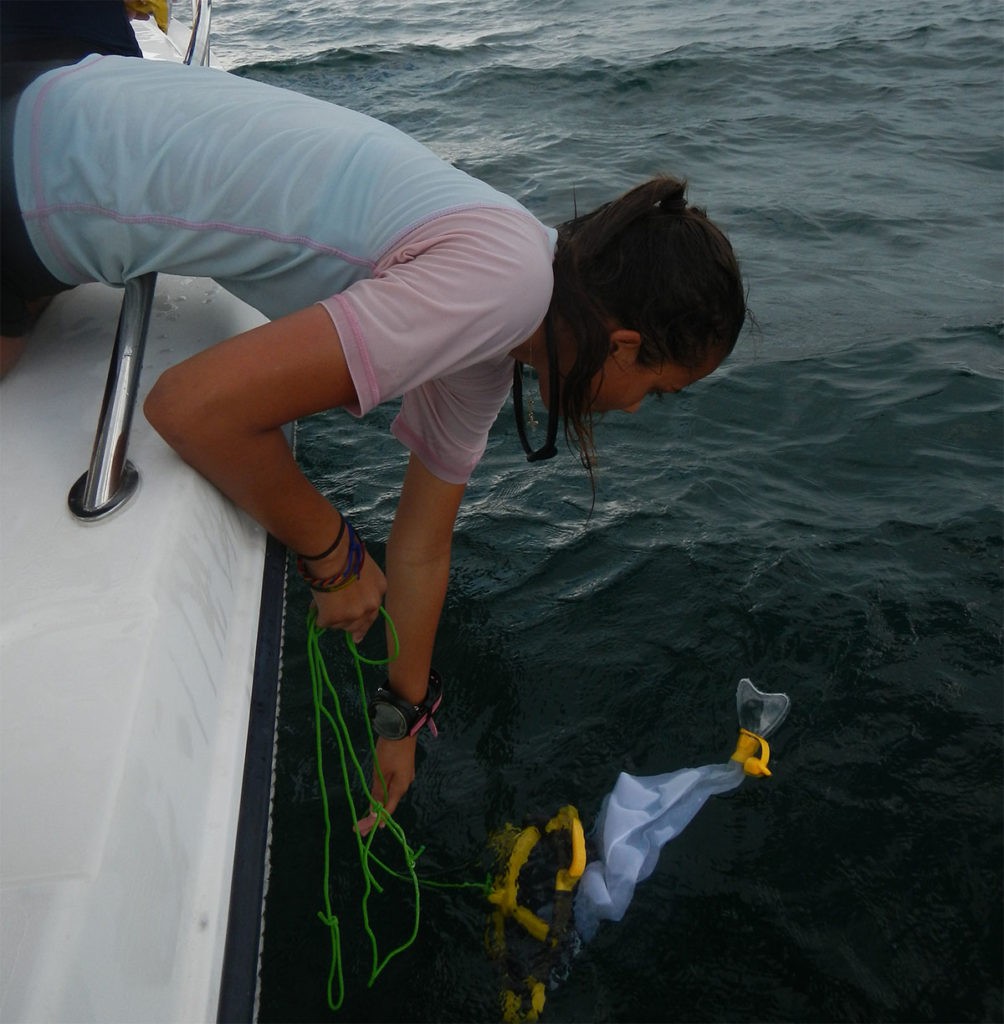